New report reveals millions missing due to corruption in Somalia 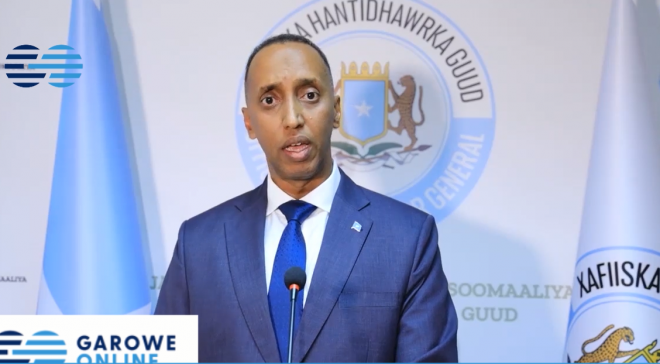 MOGADISHU, Somalia - Auditor General Mohamed Ali alias Afgoi has exposed missing millions of dollars from key departments within the Federal Government of Somalia [FGS], in what could raise questions about government expenditures.

In his report, Afgoi said 25 entities and three embassies have been audited. Unsupported expenditure amounts to $9M; contracts worth $31M not registered with auditor general’s office, the existence of unauthorized bank accounts outside the Treasury Single Account.

The Somali auditor general noted that $17 million external support has not been channeled through the country’s single treasury account. Afgoi added federal member states and Banadir did not account for funds amounting to $78M received from the federal government

According to him, he established that the government mobilized $51million for Covid-19 response, but only $15m of this was utilized. He reported a lack of comprehensive plan to coordinate government response, failure to prepare enough isolation, treatment facilities, failure to account for $3.9m COVID-19 funds to regions

For the first time, Afgoi audited the fishing sector. He found an under-collection of $56m in revenue from fishing vessels. In 3 years, the ministry of fishery issued licenses to 43 domestic companies, 15 cooperatives, 83 foreign companies affiliated to China, collected only $3.3 million

Finally, Afgoi noted a lack of regulations to support the fisheries sector, lack of oversight and inspection of fishing vessels [meaning no mechanism to accurately account for catches made by Chinese vessels]. He also said there is a lack of law in place for fishery revenue sharing

But Abdullahi Addow, a director for planning in the ministry of fisheries dismissed the Auditor General's report, adding that he failed to execute his duties responsively as enshrined in the rule of law.

"Today’s report published by the OAG in regards to the Fisheries Management is considered misleading and used wrong documents to determine the amount of $56 million that the Ministry should have collected," he claimed.

For years, the Federal Government of Somalia has often been questioned for its expenditures in certain departments, with the opposition accusing the government of misappropriation of funds.

The outgoing Somali President Mohamed Abdullahi Farmaajo has often defended his administration on matters of corruption.