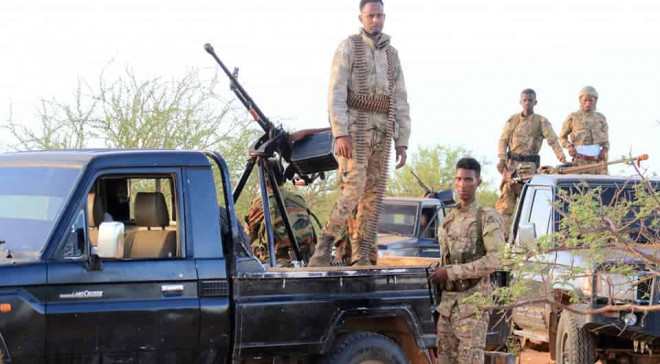 MOGADISHU, Somalia - The National Intelligence Security Agency [NISA] has killed at least 12 Al-Shabaab militants in the country, following an operation that was activated in the capital, Mogadishu, which has lately been infiltrated by the Al-Qaida linked group.

For the last three weeks, at least two explosions have been recorded in Mogadishu, leaving 10 people dead and scores injured. The Al-Shabaab militants claimed responsibility for the recent deadly attack which targeted a security firm guarding UN offices.

On Wednesday, NISA officials confirmed that a crackdown in Mogadishu yielded fruits after 12 militants were killed in the operation. The militants are believed to have been individuals behind the wave of insecurity in Mogadishu.

“A special operation tonight targeted 15 AS Mafia officers in charge of disrupting security in the capital Mogadishu. Twelve terrorists were killed. It is a national duty to protect the security and safety of the Somali people,” read the statement from NISA.

Sources say the operation was triggered by last week's bomb blast which killed eight people, wounding 17 and badly destroying a nearby school within Mogadishu. The attack was condemned by various members of the international community including the US.

Early this week, NISA operatives managed to unearth explosives in Mogadishu, arresting three people in the process. The government has intensified operations against the militants, especially in central and southern Somalia.

On Wednesday, Molly Phee, the Assistant Secretary of State, told the US Congress that Washington is keen to have AMISOM reconfigured so that it helps to contain political fallout besides helping in the fight against Al-Shabaab militants in Somalia.