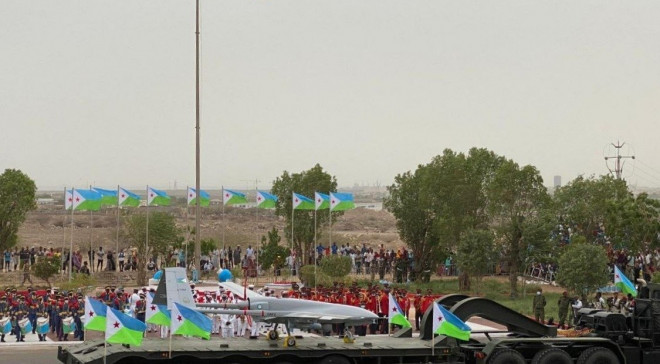 A Bayraktar TB2 drone is seen during the military parade in Djibouti in this undated photo. (Photo courtesy of @BaykarTech)

Baykar, the company that developed the combat drone, shared the images of the UCAV during the parade via its official Twitter account, celebrating the independence anniversary.

“We celebrate the 45th independence anniversary of the friendly and brotherly country Djibouti,” the statement read.

With this statement, the export of Bayraktar TB2s to Djibouti became official, which had not been confirmed by the company earlier despite several news reports circulating in the media.

Bayraktar TB2, the battle-proven drone used in Syria, Libya, Karabakh, and Ukraine, is the most exported UCAV around the world and has been sold to over 21 countries, including Djibouti.

The TB2, which has a 12-meter (40-foot) wingspan and can soar to 25,000 feet before swooping in to destroy tanks and artillery with laser-guided armor-piercing bombs, helped undermine Russia's overwhelming military superiority, which gained it the worldwide fame.

The Bayraktar drone has also received attention from Russian President Vladimir Putin, and the Russian Defense Ministry has mentioned it at least 45 times in public since the war began on Feb. 24.

The TB2 has been such a decisive factor in the conflicts in Syria, Iraq, Libya, Karabakh, and now Ukraine that it spearheads Turkey's global defense export push.