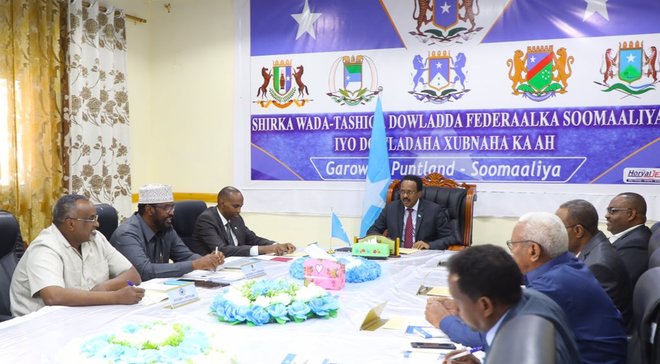 GAROWE, Puntland - The latest round of the talks in Garowe city has fuelled optimism that Somali leaders are moving closer to negotiating a compromise to the impasse worrying the country, Garowe Online reports.

However, there was still no concrete evidence of any meaningful development as the Somali president Mohamed Abdullahi Farmajo and heads of the Federal States headed into the fourth day of negotiation.

The lengthy talks are aimed to find a lasting solution to the political crisis in Somalia. If not, it will bring heavy loss to the long-chaotic nation and it is a big setback for the state and peacebuilding efforts.

Per sources, the leaders of the five Somali Federal States held an hour-long private meeting that continued until late last night following the collapse of talks between Farmajo and Galmudug head.

This came after the president has insisted an election must be held in Galmudug within its deadline, however, the state leader rejected the call and urged Villa Somalia to keep hands off his administration.

The leaders of the Federal states came back to the negotiating table on Wednesday noon to share the outcome of their meeting with the president of Somalia and PM Hassan Ali Khaire.

Electoral and Petroleum laws passed by the Somali cabinet and set for the debate in the Federal parliament featured high on the agenda at the forum, which seeks a way-out for the long-standing political standoff.

Reports from Garowe indicate that the Federal States’ leaders are demanding a review of Petroleum Act Amendment Bill 2019 and all other bills to include their input before going to the national assembly.

The share of the resources, constitution and the type of the next elections in the country are some of the main root causes of the current deadlock that led the states to suspend cooperation with the government in last year.

The Federal Member States are putting intense pressure on the central government to hold back engaging international oil companies to start oil drilling until all the requisite legal framework is in place.