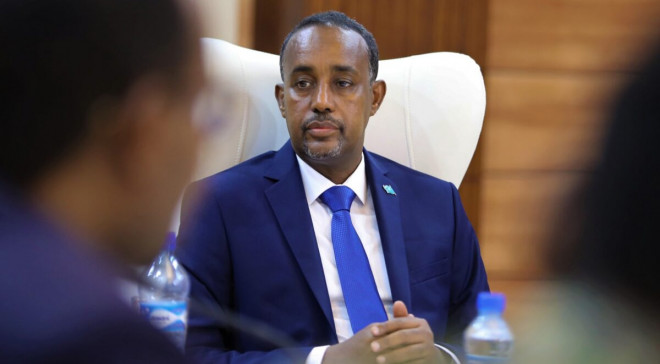 MOGADISHU, Somalia - In what could be a reconciliatory tone, the outgoing Prime Minister Mohamed Hussein Roble has seemingly apologized to members of the public, something which could give hope to Somalia, a country that is on the brink of collapse.

Security forces loyal to outgoing President Mohamed Abdullahi Farmajo and opposition leaders engaged in a fierce gunfight for the better part of Sunday, paralyzing businesses within the capital, Mogadishu for several hours.

The fighting involved rebellious soldiers who are against the extension of President Mohamed Abdullahi Farmajo's term, something which has been approved by the Lower House. The Upper House did not receive the motion for debate and approval.

While addressing the media, Prime Minister Mohamed Hussein Roble said the government is keen to embrace dialogue as a way of brokering peace. According to him peace and stability can only be achieved if all sides sit and discuss.

"I am deeply saddened by the tragedy that has disrupted security in the capital. I believe that dialogue is the best solution. It's a process that I have begun and hope to make successful. Let's work together for peace and stability of our country," he told reporters.

Ever since Lower House extended the term of the current government by two years, Roble has been holding a low profile and has rarely spoken about the crisis. He replaced Hassan Ali Khaire in September last year after the former PM resigned.

Thousands of people deserted streets as soldiers confronted each other, with some unleashing against journalists. Reports indicate that several reporters either had their properties confiscated or even beaten by the soldiers.

The incidents have been condemned by several stakeholders, among them the European Union, the United Nations, and even some local politicians. The EU, which is a major financial partner of Somalia, asked both parties to restrain themselves from engaging in violence.

"Highly concerned about the ongoing events in Mogadishu. The general interest requests maximum restraint, preserve institutions that belong to all, and dialogue. Violence is unacceptable. Those responsible will be held accountable," said Nicolas Berlanga, the EU envoy to Somalia.