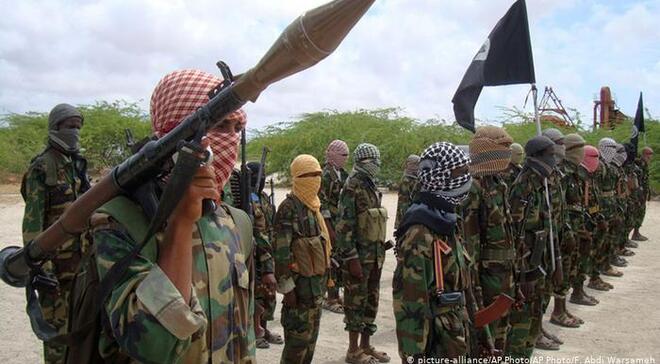 MOGADISHU, Somalia - A senior foreign fighter who has been training Al-Shabaab militants in Middle Juba was killed on Friday, a top military official told reporters in Mogadishu, in yet another dramatic victory for the Somali National Army [SNA], which is conducting vicious campaigns against the Al-Qaida linked group.

Also killed during the sophisticated operation by the SNA were three other terrorists, who are believed to have been part of the team spearheading recruitment and training of youthful fighters within Middle Juba, which has been earmarked as a terror hotspot.

Ismael Abdi Malik Malin, who serves as SNA's commander for 16th Division, told reporters that Ashraf Azmi Abu Hamda, a Nepalese, was among those killed, ending years of a hideout. The foreigner is believed to have engineered recruitment and training of dozens of Somalis into Al-Shabaab.

Besides recruitment, he was also accused of working with Amniyat and explosives Brigade, which is accused of masterminding thousands of raids within and outside Somalia, leading to the death of dozens of people.

"Our troops eliminated him after a long search and we're grateful that he's no longer there," Abdi said, adding that, "He's been training youths in Al-Shabaab and spoiled the future of hundreds of energetic young men in our country."

The commander asked locals to continue giving the SNA troops crucial leads during such operations, adding that it's the prerogative of every citizen to ensure the country's security meets international standards, arguing that the militants have run out of ideas.

SNA, he added, is committed to eliminating the threat posed by the Al-Shabaab militants, who have been fighting to topple the fragile UN-backed Somalia government, which was first created in 2012 after years of boardroom deals and political consensus.

"We cannot win this war on our own, we need your input. Sharing intelligence has been of great assistance to us. We shall continue to work with our partners to make Somalia safe and that's the commitment of each of us in the armed forces."

Hamda is one of many foreign fighters believed to be holed up in Somalia with the sole aim of training and equipping the militants, in their retrogressive agenda to spend violent extremism. Some have quit before and renounced the extremists' agenda.

The death comes a few months after US-engineered drone strikes killed both Bashir Qorgab and Yusuf Jiis, some of the much-sought terrorists. Bashir Qorgab is said to have planned the Manda Airfield raid in Kenya on Jan 5.

But of great importance, the elimination of the foreign national comes almost a week after the State Department "doubted" SNA's ability to fight the militants, arguing that the force is "still unprepared". However, significant progress proves otherwise.

The operation was carried out in Buur-gadud, Waabo, Salagle, and Dukay which are in middle Jubba, a region that has been under the control of Al-Shabaab. It's in Middle Juba that Al-Shabaab's headquarters are located just within Jilib town.

On Wednesday, the army also liberated Hawaljiri, Bernasey, Yaq-Bishaar, and Osbo villages from Alshabab terrorists in Lower Jubba, further showcasing the ability to take over security responsibilities long after the exit of foreign troops in Somalia.

With the help of the African Union and the US troops in Somalia, the SNA troops have continued to unleash against the militants, who have been significantly degraded, but can still wage small to large scale sporadic attacks within and outside the Horn of Africa nation.

Next year, the SNA will for the first time take over security responsibilities after the exit of AMISOM. Last week, President Mohamed Abdullahi Farmajo did minor reshuffles within the military, which saw veteran Army commander Abdihamid Mohamed deployed to the Navy outfit.