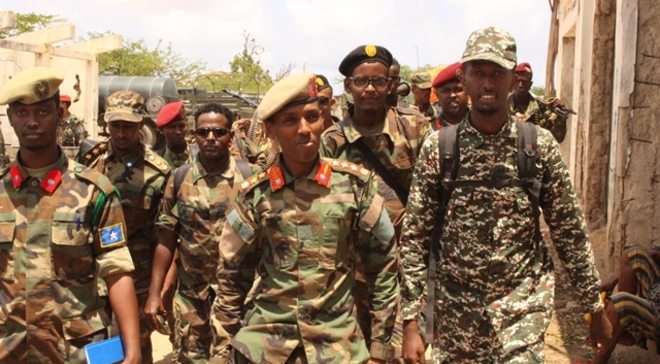 MOGADISHU, Somalia - The Somali National Army [SNA] has announced victory against Al-Shabaab militants in the volatile Lower Shabelle region, a top official declared on Monday, following a series of operations targeting the Al-Qaida linked group, which has wreaked havoc across East Africa for the last 14 years.

Since January, the SNA, African Union Mission troops, and the US Africa Command have been executing sophisticated operations against the militants across Somalia, and the outcome seems certainly convincing according to reports by the Somali National Army.

But it's in Lower Shebelle that the team had shifted attention to, that the army is now reporting tremendous progress, in the latest statement in which they claimed that the militants have ceded grounds in large swathes of Lower Shebelle, which has been a stronghold for the militants.

General Ahmed Hassan Sayid, the commander 143rd Unit of SNA, told reporters that on Monday, the team killed 12 Al-Shabaab militants in Barire town within Lower Shabelle, after hours of confrontations. The militants, he added, had camped in a nearby village before they were ambushed.

"Our troops managed to eliminate 12 militants today in Barire after hours of fighting and I can confirm that none from our team was injured. We shall continue to pursue these militants and we thank the local community for wonderful cooperation," he said, adding that a number of the militants were captured.

During the operation, he noted, top Al-Shabaab commanders were killed by the government troops who have since taken control over the town. The operation also saw several IEDs detonated by the army, which had been planted by the militants along major supply routes in Somalia.

"In the neighboring Toratorow, our soldiers managed to kill top Al-Shabaab commanders who have been coordinating attacks against security forces and innocent civilians. We also detonated several IEDs that had been planted along major supply routes," the commander said.

The army officer added that the region had been secured from the Al-Shabaab militants, saying that the army will, however, continue with surveillance in the region to ensure that no militant remains. He said most areas have been handed back to government officials.

The dramatic victory comes just a few weeks after the militants lost Abdulkadir Commandos, who was the senior Al-Shabaab coordinator in Lower Shebelle. He was killed in the outskirts of Saakow in the region following an airstrike conducted by the US Africa Command in collaboration with the FGS.

Al-Shabaab has been fighting to overturn the weak UN-backed Somalia government, but their efforts have often been met with resistance from government troops. The group has close to 7,000 active fighters but increased ground combats, airstrikes, and reported internal intrigues have significantly degraded it in the last couple of months.