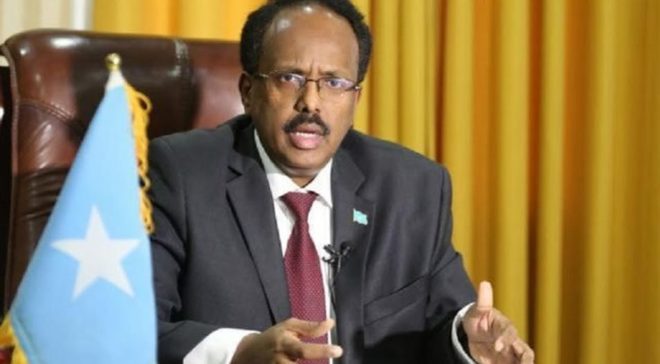 During the meeting, Somali President has ordered the army commanders and outgrown security minister to swiftly arrest a soldier who shot dead a civilian at KM5 area in Mogadishu on Monday.

"It is intolerable the army soldiers to shoot dead or harass the civilians instead of protecting them from enemy and deal with the insecurity," said the President in a statement on Tuesday.

Briefing the media following the meeting, General Mohamed Aden Ahmed, the Chief of Somali Army said the security forces have managed to capture the soldier who shot dead the civilian.

"We captured the soldier whom the President ordered to be arrested. He is now in police custody and will be put on military trail to face the justice for the murder he committed,"  said Ahmed.

Ahmed said they agreed that Police and National Intelligence and Security Agency (NISA) forces to take full responsibility of Mogadishu's security and pull out all military personnel from the city.

Lastly, the outgoing Internal Security Minister Abdirizaq Omar Mohamed has urged the public to closely work with the security agencies to strengthen the security and prevent Al Shabaab attacks.