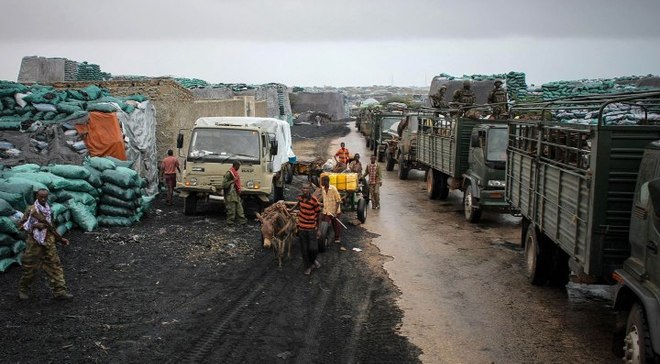 NAIROBI, Kenya - Despite tremendous steps taken by the Federal Government of Somalia and the international community towards degrading Al-Shabaab militants, the group still remains a big threat to stability in Somalia.

A report by United Nations Panel of Experts released on Monday portrays the Al-Qaida associates as 'potential security threat' that will still derail progress in Somalia.

In the report, Al-Shabaab is said to be targeting civilians believed to be spies of the US and allied forces, adding that those found 'culpable' are publicly executed.

"Al-Shabaab routinely executed civilians accused of espionage and of providing
information leading to airstrikes by the United States" reads the report.

But in a move that could vindicate KDF troops, Al-Shabaab has reportedly abandoned charcoal trade which had been banned, resorting to other income-generating activities, albeit illegal ones.

Kenya Defense Forces have been on spot for years for allegedly abetting illegal charcoal trade across Somalia. But the report says the ban has been affected by security forces.

"Initiatives taken by Somali authorities may also have resulted in the reduction
of the illicit trade of charcoal in 2019," adds the report, lauding I partners for playing a big role.

For years, Al-Shabaab militants made millions from illicit charcoal trade, which single-handedly financed her activities including purchasing of weapons and sponsoring attacks.

Although the report says, Al-Shabaab may still generate some income from the “taxation” of vehicles transporting charcoal in Somalia, the group maintains a diversified revenue base and is not financially dependent on the charcoal trade.

The new trend in the expansion of Al-Shabaab’s “mafia-style taxation” is revenue taxation of imports into Mogadishu port, extortion as well as enticing the public by providing “basic services, such as access to judicial recourse where State institutions do not reach".

“Were exports of Somali charcoal to cease entirely, Al-Shabaab’s ability to wage its insurgency is unlikely to be significantly affected,” the report says.

To stamp authority in illicit taxation, the Al-Shabaab militants have increased attacks in areas controlled by the FGS and allied forces, extorting taxes in return from locals.

Al-Shabaab has also managed to appeal to some regions across Somalia, taking advantage of inaccessibility to provide basic services to the local population.

"Al-Shabaab’s ongoing ability to generate revenues in areas the group does not physically control explains, to a degree, its resilience in the face of increased security operations by the Federal Government of Somalia and airstrikes by the United States of America," reads the report.

"Its ability to provide basic services, such as access to judicial recourse, may account for some of Al-Shabaab’s
an ongoing appeal in areas of Somalia where State institutions do not reach."

Last week, the group released a video of its leader Ahmed Omar, which is believed to have been captured hours to foiled attack at Ballidogle military base. The leader is only partially shown.

The group accused the US of forceful occupation, adding that the forces have often attacked innocent civilians through airstrikes across the Horn of Africa nation.

Further, the report partly reveals how the group uses blackmail by harassing humanitarian workers for favors. Towns that are under its control usually remit taxes for the sustainability of the group.

AMISOM troops are set to leave Somalia in 2021 according to UN tentative plans. Somali National Army is expected to take over, with the international community projecting stability thereafter.