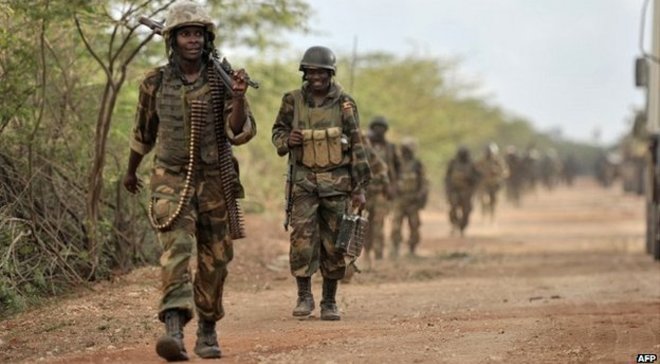 “On Tuesday morning, Al Shabaab fighters attacked the convoy, but they were repulsed and both sides have suffered heavy casualties,” said another resident in the area where the ambush attack took place.

He added Tuesday’s ambush began with roadside blast targeted the military convoy, sparking an hour-long clashes between Al Shabaab fighters and the AMISOM forces, according to the resident.

AMISOM is yet to release its own statement concerning the attack, but Al Shabaab claimed through their media that they defeated the AU troops and killed several soldiers during the battle in Taqwo village.

In a statement posted on its affiliated websites, the militants said they used a remote controlled landmine to attack the AMISOM soldiers, however, there was no immediate report of casualties on Al Shabaab side.

Al Shabaab has intensified attacks against AMISOM and Somali National Army in southern Somalia amid preparation to elect a new President on Wednesday in Mogadishu under a tight security measures.