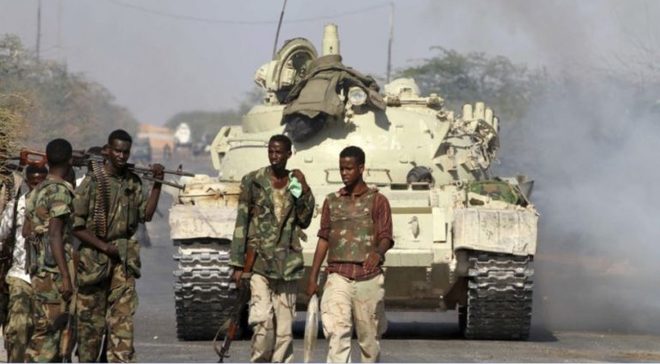 Residents said hundreds of gun-toting al-Shabab fighters have moved back into in Daynunay, a small but stretch district, about 20 kilometres east of Baidoa after engaging in fierce fighting with Somali forces.

At least three government soldiers were killed and dozens wounded in the gunfight that began in late Wednesday night and lasted for several hours. The troops abandoned their bases to escape Al-Shabaab.

"Al-Shabab fighters took control of Daynunay town after storming the military bases," said resident, who asked not to be named for his security reasons.

Nuradin Abukar, a spokesperson for Southwest state confirmed the attack at Daynunay town by the militants, saying the allied troops pulled out of the area what he described as "military tactics."

The local villagers said the militant Islamist group raised its flags inside the town and started to preach to residents and warning to collaborate with Somali government forces and the AU peacekeepers.

The capture of the district adds to several other villages in the south and central Somalia that the militant group has wrested control following the withdrawal of Somali troops in the past few months.

Al-Shabab was ousted from the capital, Mogadishu, in August 2011, but still has a presence in large areas of southern Somalia and often stages attacks across the country.

On Tuesday, Somali leaders who wrapped up a high-level meeting in Baidoa have agreed to step up the war on Al-Shabaab and launch army operation to secure and reopen the Main road linking Baidoa to Mogadishu.