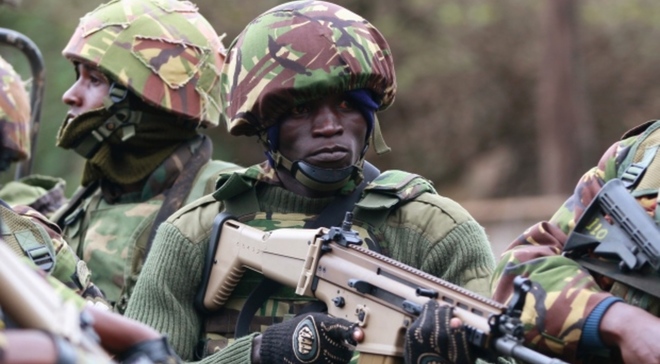 A suicide bomber from the Islamist militant group Shabab rammed a vehicle into a Kenyan military base in southernSomalia on Friday morning, setting off a ferocious firefight that killed dozens of people.

Representatives of the Shabab and of the Kenyan Defense Ministry each claimed that they had inflicted heavy losses on the other side. It was not possible to confirm immediately whether either side’s account was accurate.

The Kenyan military has played down Shabab attacks in the past, including an assault last January that Somalia’s president estimated killed at least 180 Kenyan soldiers near the village of El-Adde. In the attack on Friday, the Shabab claimed to have killed 57 Kenyan soldiers, which would make the latest assault one of the deadliest in recent memory.

The Lower Juba region of Somalia, where the attack occurred, is not easily accessible, unlike the capital, Mogadishu, where the Shabab carried out attacks just this week.

Somalia, which has been in varying states of violent chaos since a longtime dictator was overthrown in 1991, is the site of a clandestine American-backed war involving Special Operations troops, airstrikes, private contractors and African allies. The Obama administration expanded the legal scope of the military operation Congress authorized against Al Qaeda after the Sept. 11, 2001, attacks, even though the Shabab did not exist at the time.

The African Union runs a peacekeeping mission in Somalia, under the auspices of the United Nations, and the base that was attacked, in the town of Kolbio, was under the command of that mission.

Abdiaziz Abu Musab, a spokesman for the Shabab, said in a statement: “Our fighters overran the base and confiscated military vehicles and equipments during the raid. We have counted the deaths of 57 Kenyan soldiers.”

In a phone interview, Joe Kibet, a spokesman for the African Union mission, dismissed the Shabab claims as propaganda but said that the mission was “still awaiting information” about the death toll, because communications were down.

Later, however, Lt. Col. P. M. Njuguna, a spokesman for the Kenyan military, disputed that account, saying that his country’s soldiers had “repulsed the terrorists, killing scores.” He dismissed the Shabab’s account, adding, “It is important to note that the information being peddled by terrorists on social media is false and part of their propaganda.”

Residents of Kolbio described hearing two big explosions, followed by heavy gunfire, as hundreds of Shabab militants attacked the base, around 5 a.m.

The town’s mayor, Mohamed Tohyare Nuh, was among the people killed, according to residents interviewed by VOA Somali, the Somali-language service of Voice of America.

Cabdinaasir Abdi, a resident of Kolbio, described “a heavy attack” and “hundreds of Shabab fighters entering the African Union base after huge explosions and gunfire."

The attack on Friday was reportedly planned in the town of Badhaadhe, where Kenyan soldiers conducted a large-scale operation just a few days ago. Social media accounts affiliated with the Shabab reported that the militants who carried out the attack were from a brigade that was also behind the attack near El-Adde last January.