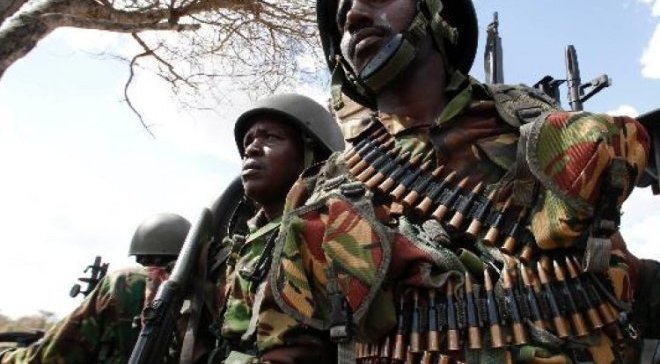 KISMAYO, Somalia - The Al-Qaeda-linked extremist group Al-Shabab has claimed to have killed at least 27 soldiers in a massive attack in southern Somalia on Monday, Garowe Online reports.

The attack began with a truck bomb detonated at the gate at 5 a.m. local time, then heavily armed fighters stormed the army base in Sanguni village, about 50Km north of Kismayo city.

Heavy fighting between the troops and militants ensued following the blast which continued for about an hour. Military sources said the truck bomb was destroyed before reaching its target.

"An al Shabaab suicide bomber rammed a truck filled with explosives at a military base used by Jubbaland, SNA, and U.S. troops in Sanguni before gunmen stormed it," said a local resident who spoke to Garowe Online by phone.

More than 30 others were wounded in the pre-dawn raid, which becomes the second attack in two months on the same military camp near Kismayo port city. However, the exact number of the casualty figures could not be independently verified.

The group often exaggerates death tolls in such attacks in the country. Some reports suggested that three soldiers and seven Al-Shabaab members died during the firefight.

Local elder Hassan Nur said a military commander was among the dead and the situation has returned to normal after the attackers were neutralized by the allied forces.

Last June, An American service member, Staff Sgt. Alexander Conrad, 26 was killed and 4 others were wounded when Al Shabab fighters launched a mortar fire and gun attack on their base.

This is the second U.S. military fatality in Somalia since last year.

In May 2017, Navy SEAL Senior Chief Special Warfare Operator Kyle Milliken was killed in an al Shabab ambush. His death was the first U.S. military death in Somalia since 1993.

There are about 500 U.S. troops in Somalia on an advise and assist mission to help the Somali military in its fight against al Shabab, an al Qaeda-affiliated terror group.