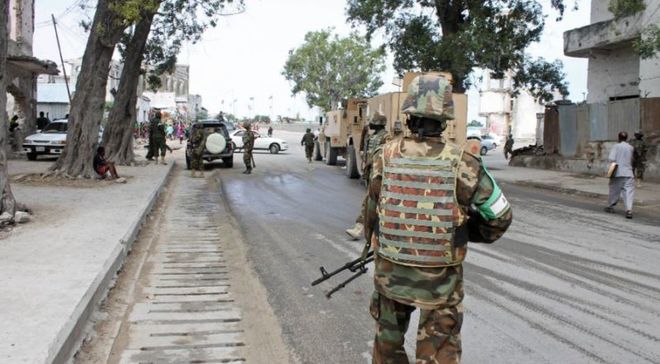 MOGADISHU, Somalia-African Union Peacekeeping forces in Somalia (AMISOM) said they have vacated a large military base in the capital Mogadishu on Tuesday morning, Garowe Online reports.

Burundian soldiers serving with AMISOM contingent have made a complete pull out of their camp in Gahayr, ex-university compound in Wadajir district, west of Mogadishu.

The AU forces had been stationing in the base for nearly ten years, since the beginning of their UN-mandated mission to restore peace in Somalia and help the Federal government in the war against al-Shabaab militants.

The Burundian troops who left the university building are relocating to Jowhar, the regional capital of Middle Shabelle region in southern Somalia, according to AMISOM statement.

Somali Police forces were reported to be taking over the base from AMISOM temporarily, and will be in charge of the security of the areas near ex-control Afgoye suburbs.

The campus has been handed over to the Ministry of Education, sources said.

AMISOM soldiers are still based in several positions in Mogadishu, including Mogadishu Stadium, despite calls from the country’s football association to leave to main soccer facility.