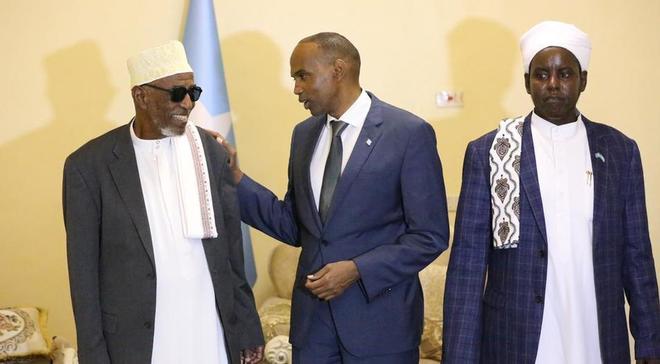 The clashes between SNA troops and moderate Sufi ASWJ militia left 16 people dead and dozens injured, officials say, events which could give Al-Shabaab a loophole to continue with dominance.

The deadly clashes began at Dhusamareb, the administrative capital of Galmadug state on Thursday night and continued until Friday before spreading to Guriel town, 40 miles away on Friday, residents said.

But by Friday, 19 Ahlu Sunna Wal Jama'a [ASWJ] militia surrendered to the military after a heavy assault, forcing group leaders to end the standoff. By 3 am on Friday, SNA troops took control of the fragile city.

The 15th Brigade under the leadership of Gen. Masood M. Warsame, a former Sufi fighter, arrested and detained several ASWJ leaders after the ceasefire, although their fate still remains unclear.

Among those in the SNA custody include ASWJ spiritual leader Moalim Mohamud Hassan and Sheikh Mohamed Shakir, who declared himself the winner of Galmadug presidential polls.

By Friday, several residents fled the town following fierce fighting between the two parties, but a number of them returned after calmness was restored by government forces, sources said.

Although the government's next course of action remains unclear, the under-siege leaders could be put under house arrest or be banished from the town for safety reasons. Such actions have befallen dissidents before.

Both Ahlu Sunnah Wal Jama'a [ASWJ] and SNA had been working closely in the fight against Al-Shabaab, but the recent political realignment in the region has put them at loggerheads.

Initially, nine people died during the clashes as both sides tried to take control of the town, which has been at the epicenter of political fireworks lately.

But the death toll hit 16 on Friday evening, with two Turkish-trained soldiers and a policeman also succumbing to their injuries, sources said.

A recently held regional election is the bone of contention, leading to accusations and counter-accusations that FGS had imposed Mr. Ahmed Abdi Kariye as the president.

His victory is yet to be recognized by ASWJ, which installed Mohamed Shakir as their bonafide leader, with immediate former president Ahmed Dualle also claiming his stake.

But the moderate Sufi Muslim group accused SNA troops of provocation, leading to the fierce fighting that lasted for over 20 hours.

"We sacrificed our wealth and lives to liberate these areas from the terrorist al Shabaab... (but) the Somali government forces openly attacked Inji house, which is a home for ASWJ leaders," Shakir said on Thursday.

"We have one enemy and that is al Shabaab. Let's jointly fight the terrorists," he added, in a reconciliatory speech over the fight against Al-Shabaab.

However, the arrest of the Sufi fighters could further derail the war against Al-Qaida linked Al-Shabaab militants, who have been struggling to topple the UN-backed Somalia government since 2008.

Rodney Hunter, a US diplomat, told United Nations Security Council early this week that internal rivalries among allies in Somalia could substantially jeopardize the war against Al-Shabaab.

"The operation has stalled," Rodney Hunter, the U.S. political coordinator to the United Nations, told the Security Council this week.

"It is imperative that federal government and federal member states' security services focus on combating al-Shabaab, rather than engaging in armed conflict with each other to resolve political disputes."

Federal states have been accusing President Mohamed Abdullahi Farmajo of interference, arguing that Mogadishu administration is keen to erode gains made in those states.

With political competition also contributing to the standoff, there also claims that FGS is opposing financial support towards federal states, which are keen to have millions of security aid from Somalia partners.