​Somalia: At least One killed in Car bomb blast in Mogadishu 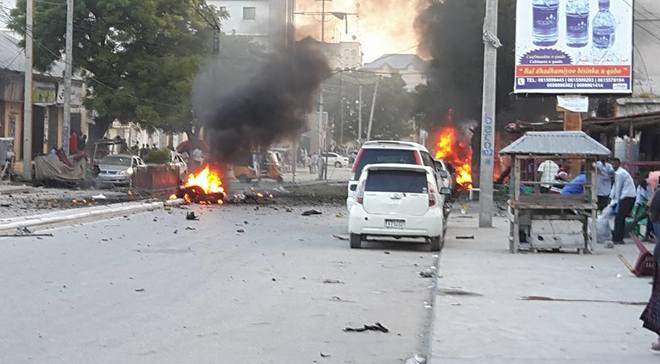 MOGADISHU, Somalia - At least one person was reported to have been killed, and three were wounded in a powerful car bomb explosion in Somali capital, Mogadishu on Thursday night, Garowe Online reports.

An explosives-laden car blew up at a security checkpoint after it was stopped and seized by Police next to Makka Al-Mukarama hospital in a busy road that is flanked by several upscale hotels at around 7:30 p.m. local time.

"So far, I have seen my own eyes at least one dead civilian. Three were also injured and immediately rushed to hospital by the ambulances ," Mohamed Osman, a witness, told GO over the phone.

Osman added that the security forces are chasing the would-be suicide car bomber who reportedly escaped from the scene after his car was captured at the Police checkpoint in the capital.

There was no immediate claim of responsibility, though the Al Qaida-affiliated Islamist militant group Al Shabaab has launched frequent attacks, including car bombings in the city amid tight security.

Last Friday, at least 6 people, including women and children  were killed, several wounded by a massive car bomb explosion near Ambassador hotel on Makka Al-Mukarama street in Somali capital.