Somalia: CIC summit in Garowe wraps up with big decisions 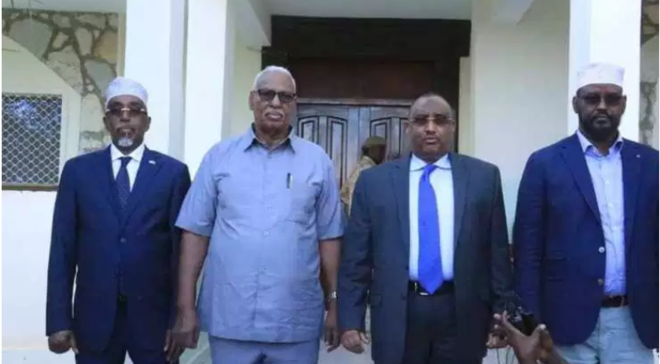 GAROWE, Puntland - The fourth conference of Somalia's Council of Inter-state cooperation [CIC] held in Garowe, the capital city of Puntland state was wrapped up on Thursday, Garowe Online reports.

The CIC heads and participants at the meeting have discussed key issues, including security, political and social issues and finally released a joint communiqué seen to be critical of the Federal Government of Somalia plans.

They made tough decisions, with the formation of "Interstate security council" a new political party [National Progressive Party] and joint integrated security force drawn from the four regional states' Darwish under one command.

Each of the Federal State has agreed to contribute 1,000 soldiers to the new Inter-state forces who will be integrated and trained within two months, with the aim to set up a united front against the terrorists.

Additionally, the regional leaders have accused the central government of failing the security of the country and the fight against al-Shabaab due to no proper coordination between AMISOM troops and national army.

"Since the current Government came into power in February 2017, the security has fallen apart and the country is at the brink of falling into the hands of Al-Shabaab again," read the statement in part.

This came the relations between Villa Somalia and regional states are “at a low point,” after the latter suspended cooperation with Mogadishu, citing a lack of political and security progress in the country.

CIC blames the government for interfering with regional issues, failure to execute security architecture and not fulfilling political deals with no mechanism to share national resources and foreign aid.

As the political crisis continues to deepen with no sight to end, the CIC leaders argue that they will only resume normal ties with Mogadishu until all the agreements reached in the past meetings held in the capital and Baidoa are implemented.