​Somalia: Civilian injured in explosion in the Somali capital 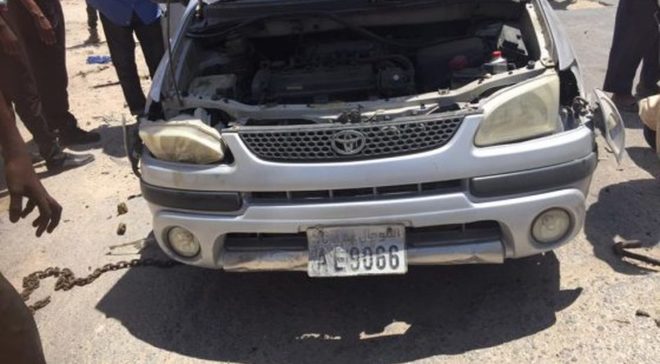 MOGADISHU, Somalia- One person was critically wounded in a car bomb blast occurred in the Somali capital of Mogadishu on Thursday morning, Garowe Online reports.

Confirming the incident, Banadir region’s spokesman Abdifitah Omar Halane, told local media that the explosion has resulted from an improvised explosive device (IED) placed in the car and detonated in Shibis district.

The blast injured Mustaf Jaylani Abu Sheikh, a man said to be working for Mogadishu seaport, as he was on his way to his house in Kaaraan district, according to the Benadir regional administration spokesman.

“A magnetic bomb was placed under the seat of his vehicle that exploded while he was on his way to his residence near the university, where the bomb exploded,” Halane said.

Gruesome Pictures taken from the area shows car's seat ripped off by the bomb which took place as the city's main streets blocked by security forces for the ongoing session at the Parliament hall.

No group immediately claimed responsibility for the attack, but the Police officers say the Al Qaida-linked terror group Al shabab is suspected to carry out the attack.

Mogadishu security is deteriorating ahead of the upcoming presidential election slated for February 8, with 24 presidential hopefuls vying to compete for the presidency.