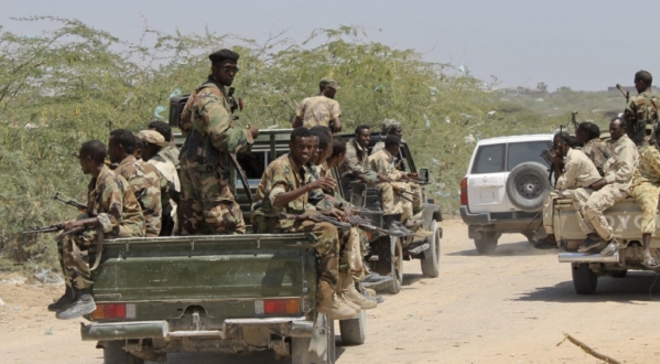 MOGADISHU, Somalia - A newly appointed deputy governor for the Gedo region has threatened to mobilize SNA troops to invade Kenya with the crisis in the region almost reaching boiling point.

Abdi Moalimu has warned on Sunday that "we shall attack Kenya up to Nairobi" amid violence in the region.

For the second week in a row, a conflict has slowly built up, threatening to escalate to a possible genocide in the troubled region.

Early this week, the towns of Balad-Hawo and Dolow were captured by Turkish-trained SNA contingent from Mogadishu, local media said.

Gedo is one of the regions that is manned by KDF troops in some sections, thus Kenya's commitment to protecting the regional government under Ahmed Madobe.

Speaking at Balad-Hawo on Sunday, Moalimu insisted that Kenya is responsible for the tensions in the region, adding that SNA troops are ready for "adequate response".

"We cannot allow interference of our territory by KDF. This is totally unacceptable," said Moalimu.

He added: "We shall mobilize our troops to invade Kenya and capture Nairobi. Somalia is not a colony of Kenya and that must be clear."

At least 700 troops from SNA were dispatched to the region and they reportedly took over without resistance from Jubaland forces.

Moalimu's statement is likely to trigger a response from Nairobi, which has traditionally backed Jubaland as its "buffer zone" in the war against Al-Shabaab.

What triggered the standoff?

The escape of Abdirashid Janan, the Jubaland security minister from detention in Mogadishu last month, is believed to have precipitated the standoff.

Janan, told the BBC Somali service that "senior government official aided my escape after FGS refused to let me go." He accused NISA boss Fahad Yasin and Mogadishu police chief Sadak John of being behind his arrest.

The top official was arrested in August 2019 before he was thrown into detention for allegedly "committing serious crimes" in Gedo.

After his escape, he reportedly jetted Nairobi aboard a private jet and would later return to Beled-Hawo, his stronghold in a KDF chopper.

Somalia termed him a "dangerous fugitive" who should be "arrested and handed over for prosecution" in a letter copied to Interpol and Nairobi this week.

Mogadishu also warned that "he should not jeopardize the good relationship between Kenya and Somalia" which has existed for years.

Similar calls were made by Amnesty International, which asked Kenya to arrest and extradite him to Somalia for prosecution.

But Nairobi has remained tight-lipped about the predicament, despite pressure from Somalia to surrender Janan, who is believed to be holed up in Mandera.

Kamau Macharia, the Foreign Affairs Principal Secretary, told reporters that "we are not aware" of Janan's presence in Kenya.

The top diplomat said: “This matter is not in our hands. I suggest you contact those who might know about it, the security forces."

Omar Mohamed Maalim Hassan, the Mandera East MP, however, confirmed Janan's presence in the region, calling for his immediate extradition.

"Let him go back to Somalia, we are not ready for a war. We are a peaceful nation. Let him leave immediately," he was quoted on Saturday.

Moalimu's sentiments come amid underground mobilization by Jubaland forces, who are ready to respond to the aggression.

Abdi Hussein, Jubaland information minister, said our forces "will respond to this naked aggression" by the SNA troops.

Janan is said to be the force behind the ongoing mobilization, which has seen Jubaland troops lose one soldier. The role of KDF however, remains unclear.

On Friday, FGS arrested Mohamed Hussein, the Deputy Governor for the Gedo region, who has since been replaced by Moalimu, reports indicated.

Also apprehended was Ismael Qorrah, the district commissioner of Bardere, another critical region within Gedo in Somalia.

Critics have accused Farmajo of focusing on "non-issues" instead of directing his war in the fight against Al-Shabaab.

Abdirahman Abdishakur, the Wadajir party leader, said the aggression in Gedo could give room for Al-Shabaab to expand its territories.

"The federal government doesn’t have troops to fight Al-Shabab, nor does it have forces to stabilize towns liberated from AS," he argued.

"Here, Al-Shabaab wins twice. First, those troops in Gedo and Dhusomareb are not fighting it, and second, the grievances that arise from the actions of the government will help it gain many supporters," he added.

Rashid Abdi, a security expert in the Horn of Africa, also believes the situation in Gedo could trigger a possible war between Kenya and Somalia.