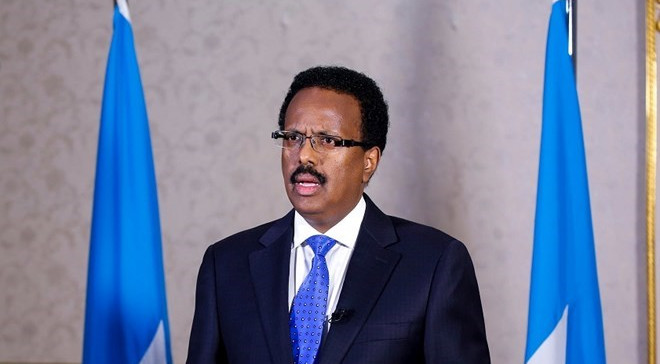 MOGADISHU, Somalia - With the election cycle almost coming to an end after months of waiting, it's now evident that outgoing President Mohamed Abdullahi Farmaajo is hell-bent to frustrate the process, a number of legislators have argued, in what could trigger a political storm in Somalia.

This week, the new parliament picked a committee that shall oversee elections of substantive speakers for the bicameral house despite the fact that a number of seats in HirShabelle and Jubaland are yet to be filled due to political standoff.

But with the quorum in place, it's now highly likely that the presidential election will go on immediately after the speakers are elected, thus indicating Farmaajo may be in his final stages as president or in the critical scenario, get another term for the next four years.

For months, both political pundits and opposition figures have been accusing Farmaajo of plotting to overstay in power through the frustrating electoral process by seeking to install his confidants in both chambers of parliament. Last year, his attempts to extend his term were thwarted by the military.

But the dragged electoral process may have shifted to parliament, where the president is allegedly using millions of dollars to sabotage the elections of the speakers. For instance, it's believed that on Monday, Farmaajo was keen to block the joint session of the house.

"Villa Somalia pledged to reward its loyal Members of Parliament with millions of dollars if they succeeded in frustrating the first joint session of parliament and prolonging elections of the president," claimed Ahmed Fiqi, a former federal Member of Parliament in a Twitter Space conversation with Garowe Online.

As MPs continued with the first joint session after taking the oath, the House came under attack from Al-Shabaab terrorists, who took responsibility for firing several mortar shells at the vicinity of the heavily protected area which is situated in Villa Somalia.

Prime Minister Mohamed Hussein Roble was among the first to condemn the incident as "cowardly". But the opposition believes certain government functionaries could be working closely with Al-Shabaab, based on the UN report that claimed a number of security agencies have been infiltrated by the militants.

"As per today's security intelligence, the mortar shells were fired from areas very close to parliament house. This illustrates the security threat of the legislative branch of parliament," noted Abdirizak Mohamed, the MP in charge of the committee which is preparing for elections for the speaker.

Mahad Salad, an MP, also told Garowe Online that Farmaajo is determined to attack parliament by infringing security besides frustrating parliamentary procedures for the remaining electoral process. Cases of massive bribery to derail agenda in parliament are common occurrences throughout Farmaajo's reign.

"Somalia's legislative branch is under attack in terms of security and parliamentarian procedures by the very own government which is supposed to protect it," said Mahad while accusing the government of turning the sword to parliament.

PM Roble has persistently differed with Farmaajo and even at times forced his way to protect the integrity of the exercise. For instance, he had to fire former NISA boss Fahad Yasin, who was immediately absorbed as presidential security advisor by Farmaajo.

This is not the first time the Farmaajo administration is linked to derailing the electoral process or intimidating opponents and at times orchestrating assassinations. Last year, the government was linked to the death of Ikran Tahil, a cyber security chief within NISA.

While the government insisted Al-Shabaab was behind the murder, the militants distanced themselves. A number of critics including former President Hassan Sheikh Mohamud and slain MP Amina Mohamed Abdi linked the government to the murder.

But Amina's life did not last for long, having been a victim of the recent Beledweyne town attack. Although the government also blamed Al-Shabaab, reports filed by Garowe Online indicate that Amina was killed by a former Al-Shabaab recruit in Gedo, who had b eh absorbed by NISA.

With the country now running out of schedule, MP Abdirizak Mohamed maintains that the House will continue executing its mandate by ensuring elections of speakers and president happen as soon as possible.

"As per the law, the Committee has the mandate to plan the election schedule and release it to the public. Therefore, the date for election must get the approval of the house," he noted during the Twitter Spaces conversation with Garowe Online, Monday.