Somalia: Farmajo in Brussels for Int'l summit on his country 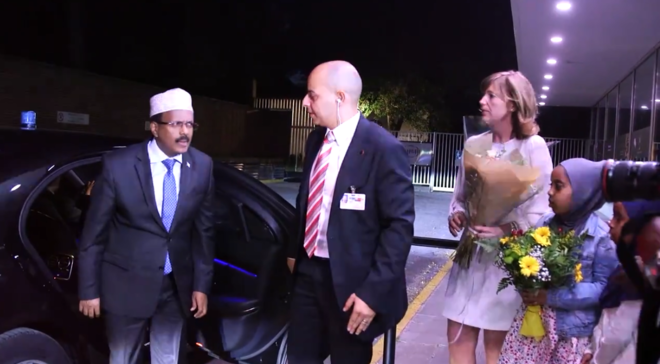 BRUSSELS, Belgium - A high-level delegation led by President, Mohamed Abdullahi Farmajo has arrived in Brussels on Saturday night ahead of an International conference on Somalia, Garowe Online reports.

On Saturday, Al Shabaab has carried twin car bombings and gun attack near the presidential palace in Mogadishu upon the departure of Farmajo.

The attack which was the second of its kind around Villa Somalia, the State House in a week left at least ten, including attackers dead.

Puntland President Abdiweli Mohamed Ali "Gaas", along with members of his government left Garowe on Saturday for Brussels to attend the upcoming Somalia Partnership Forum due to kick off on July 16.

The Brussels Forum on Somalia which will run for two days brings together the leaders from Federal Government, regional States and international partners will focus on Security, AMISOM withdrawal and 2020 polls.

"The Federal Government of Somalia and international partners, including the UK will meet in Brussels on the 16th & 17th July to take stock of progress since the London Conference, and agree with next steps to support security, stability & prosperity for the benefit of all," UK embassy in Mogadishu tweeted.

Somali leaders are expected to present a Security plan to the donors and International partners during the High-Level Partnership Forum in Brussels to seek financial support for its implementation.

In the security architecture, Somalia is preparing a strong national army capable to take over the country's security responsibility from the African Union forces [AMISOM] ahead of their exit in 2020.

Somalia hunts for coordinated international efforts in training and equipping Somali forces. In the past five years, the UK, US, UAE, and Turkey conducted training of various divisions of Somali forces.

European Union (EU) Political and Security Committee has pledged €100 million support for the Somali government during a meeting in Brussels last May which was attended by Somali PM, Hassan Ali Khaire.