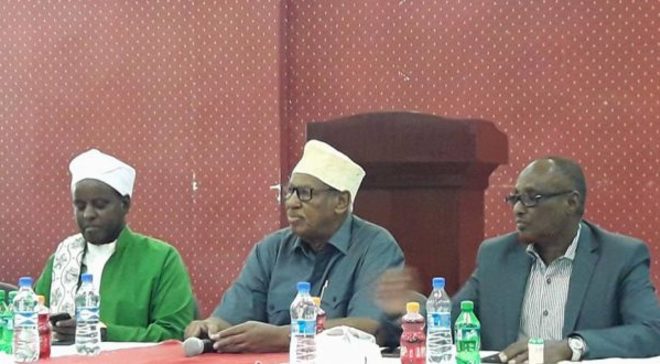 MOGADISHU, Somalia - Somalia's Federal government is hosting talks between the top leaders of Galmudug, in the hope of ending the recurrent political stalemate in Federal Member State, Garowe Online reports.

Sources revealed to Garowe Online that Galmudug President Ahmed Dualle Geelle Haaf is in Mogadishu for meeting with rival Vice President and state assembly speaker who are at loggerheads over last year's Djibouti power-sharing accord.

The mediation conference organized by the Federal Ministry of Interior is aimed at resolving the renewed rift between regional leaders to move the fragile state towards the path of sustainable peace and development.

The state officials who are currently split into two opposing sides, one based in Dhusamareb and the other in Adado city are expected to bury the hatchet during the talks in Mogadishu.

President Haaf has been accused of violating the regional administration's constitution and extending his term illegally following the merger of Galmudug and the moderate Islamist group of Ahlu-Sunna last January.

The Somali government is said to have forced Galmudug president to postpone the announcement of his new cabinet line-up due to the escalating dispute over the power-sharing deal.

IGAD has brokered peace agreement Galmudug and Ahlu Sunna in Djibouti last December, where they inked a pact that led to the union of the rival factions in central Somali regions following years of repeated disputes and division.