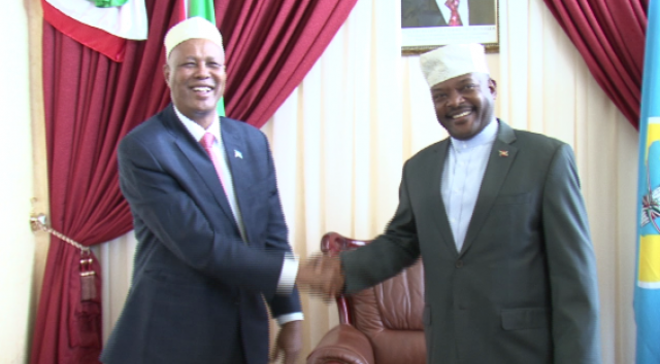 MOGADISHU, Somalia Oct 19, 2014 (Garowe Online)-Federal Government of Somalia and the troop contributing country of Burundi have signed a co-operation agreement in the capital, Bujumbura on Sunday, Garowe Online reports.

Somalia’s State Minister for foreign Affairs Burci Hamsa and his Burundian counterpart Laurent Kavkure signed the bilateral deal with the two countries agreeing on reconsideration into the closure of Somali embassy in Bujumbura.

In regard to the agreement clinched by Somalia and Burundi in 2012, the two underlined the need for bolstering diplomatic relations and joint investigation into the issues relating to the claims of sexual abuse by Burundian-AMISOM forces in Mogadishu.

Burundi sent peacekeepers into Somalia as part of continent-wide campaign aimed at bringing about peace in the war-ravaged horn of Africa nation, Somalia.