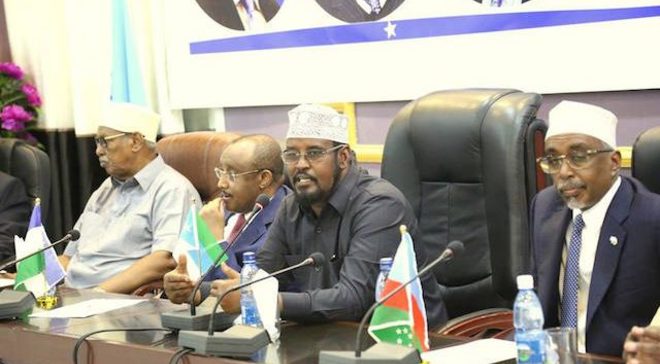 KISMAYO, Somalia - The leaders of Somalia's Federal States have announced on Saturday that they suspended all cooperation and relations with the Federal Government, Garowe Online reports.

The decision is likely to hinder to the International community's efforts to defeat the Al-Qaeda-linked Al Shabaab group and pacify the Horn of Africa Country as it emerges from two decades of bloody conflict.

In a joint communiqué released by the Council of Inter-State Cooperation after 4-day forum in Kismayo, blamed the government in Mogadishu for failing to manage the National Security Architecture well.

The council which is made up of Jubaland, Puntland, Southwest, Galmudug and Hirshabelle regional administrations was formed last year in Kismayo amid standoff Federal Government of Somalia.

The leaders accused the central government of refusing to share power and foreign aid with the regions in line with the country’s federal structure, as well as taking its eye off the fight against Al-Shabaab.

Additionally, the Federal Members States of Somalia have voiced concern over what they termed "politicization” of the National Intelligence and Security Agency [NISA] functions by Villa Somalia.

They said the council would only resume normal relations with Mogadishu when the central government respected the constitution and all deals agreed during the past national security council's meetings.

There was no immediate response from the Federal government of Somalia.

The statement seen by Garowe Online was emailed to Finance Ministries of the country's five Federal member States and asked to submit half-year financial records between 1st January and 31st June 2018.

The Federal Finance Ministry of Somalia said in the letter that the audit report is key to Somalia’s debt relief process by the International Monetary Fund [IMF].

The country's central bank estimates debt at about $5 billion.

To win debt relief offered to the impoverished nation, the Western-backed weak Somali government has effectively to draw up a financial management plan.