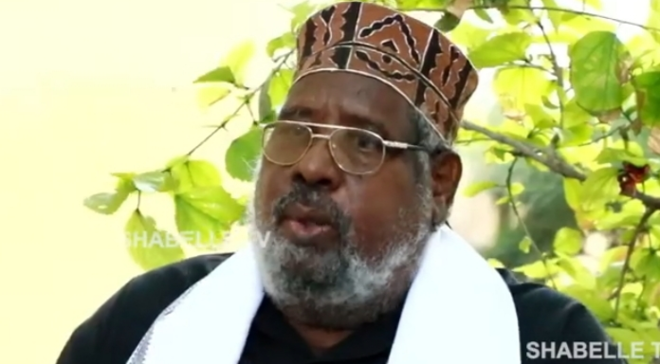 MOGADISHU, Somalia - Villa Somalia has on Wednesday fired former military general from the reconciliation committee that targets to bring on board Somaliland, which declared self-independence from Mogadishu.

Ambassador General Abdirahman Abdi Hussein, who served as police chief under the former central government led by late president Mohamed Siad Barre, has been facing resistance from Somaliland over "his role in the massacre".

Secessionist Somaliland declared self-independence in 1992, ending ties with Mogadishu administration and years of genocide at the North.

Efforts to reconcile the two are yet to succeed, even though the UN is yet to formally recognize the Hargeisa administration.

Abdinur Mohamed, the Villa Somalia Director of Communications, announced Mr. Hussein's removal from the committee, whose work has dragged for months.

He said: "Amb. Abdirahman A/Hussein (Guulwade) ceases to be a member of the Somalia & Somaliland reconciliation Committee appointed by HE @M_Farmaajo."

"His views do not represent the Committee, nor the Federal Republic of Somalia which is guided by the vision for unity, brotherhood, and oneness," he added.

Initial reports indicated that the former military general resigned from the committee after a series of "divergent opinions" with other members.

Reports indicate that Hussein had "defended" violation of rights on Somaliland people by the former administration of Siad Barre.

Turkey behind the reconciliation

Such efforts, also engineered by Ethiopia, have hit the dead end since 2015, given the reluctance by Hargeisa, local media said.

Unlike other states in Somalia, Somaliland is entirely independent and has often had a strained relationship with Mogadishu.

Last month, Somaliland lawmakers demanded the resignation of two generals from the committee, with Mr. Hussein being their major target.

Also targeted was Mr. Ahmed Jama Muse, a former general, who hails from Somaliland. Curiously, he was included in the Mogadishu delegation.

Mr. Abdifatah Dahir Ismail, a member of Somalia Federal Parliament who hails from Somaliland, who is also a member of the committee, supported their expulsion.

The lawmaker said the expulsion of two former generals from the Committee is of "paramount importance" so as change the negative perception of the public on the committee.

“We had officially informed that the two former retired Generals to tender resignation from the committee tasked Somalia and Somaliland reconciliation,” said the MP.

International Crisis Group last year noted desperation by Farmajo to reunited the breakaway region with the rest of Somalia.

“With elections approaching in 2020 and 2021, respectively, Somalia’s President is particularly susceptible to pressure from his nationalist support base to shy away from talks and the give-and-take they may entail,” the report said.

It added that Somaliland leader Muse Bihi, a former rebel commander who fought against the government in Mogadishu in the late 1980s, is less open to compromise than his predecessor.

“He will also face political pressure from hardline separatists, including other former insurgents, for whom any concession to Somalia is anathema,” says the report.

Gen Hussein is a former commissioner of police—who fled with Barre during the popular uprising in Mogadishu in January 1991—was deputy head of the six-member national commission for reconciliation dialogue with Somaliland.