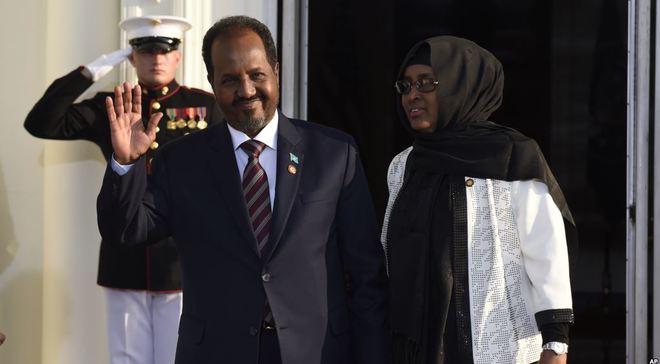 The U.S. Consulate in Mogadishu has rejected to issue a VISA for Mohamud after he was invited to Harvard’s African Development Conference slated for next Tuesday, on 27th March.

World Affairs Council of Marine which organized the event has confirmed the denial of the VISA to the ex-leader.

Mohamud who has served as the 8th President of Somalia 2012-2016 was scheduled to deliver a speech titled “Somalia the Crossroads: Opportunities and Challenges Post Civil War” at the world affairs council event.

“We regret to share that H.E. Hassan Sheikh Mohamud was denied VISA issuance by the U.S. Consulate in Somalia under executive order 13769, protecting the nation from foreign terrorist entry into the United States,” said World Affairs Council of Marine in a statement.

World Affairs Council of Marine Executive Director, Kate McCarthy said they are deeply sorry that Mohamud will not be able to present as a keynote speaker and miss the story of Somalia at the key event.

The U.S. Embassy in Mogadishu argues that Somalia is one of the Muslim nations included in the travel ban and blocked their citizens from entering the United States of America [USA] last year.

So far, the current Somali Federal Government is yet to comment on the issue.