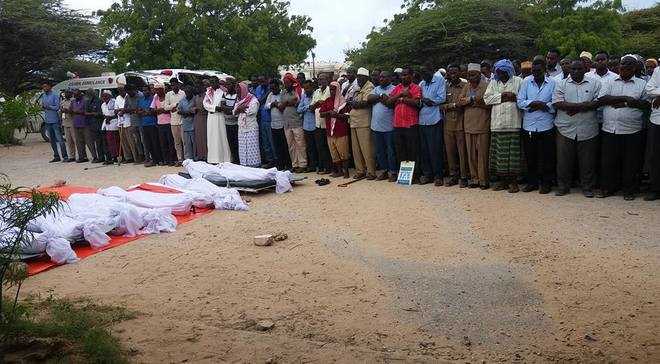 MOGADISHU, Somalia - A funeral was held on Thursday for 10 people killed in a U.S.-backed attack on Bariire town, about 50Km South of Somali capital, Mogadishu August 25, Garowe Online reports.

Members of Somali Parliament and relatives have attended the burial event.

The Federal government of Somalia was reported has admitted killing civilians, and promised to pay a compensation for the victims, pledging "blood money" estimated $70,000 USD for each dead person.

The bodies, including three children aged between 13 and 15 years  have been kept in refrigerators in a hospital in the capital for six days, in a protest to their killing by their families demanding compensation from the government.

"These people were accidentally killed in the raid and the government has agreed to solve the stalemate through dialogue with their relatives and pay a compensation," said MP Mohamed Ahmed Abtidon.

Sources tell GO that 6 of the victims were from Habargidir, a Somali clan, part of the larger Hawiye group and the Government said it is investigating allegations that they were Al Shabaab members.

The government set up a ministerial panel to probe the killings of the people in joint military operation in Barire, last Friday, August 25, but the team's investigation result has not yet been released publicly.

The U.S. backed raid was carried out on a suspected farm located near Bariire, days after Al shabaab militants were pushed out of the area by Somali National Army (SNA), along with African Union forces (AMISOM).