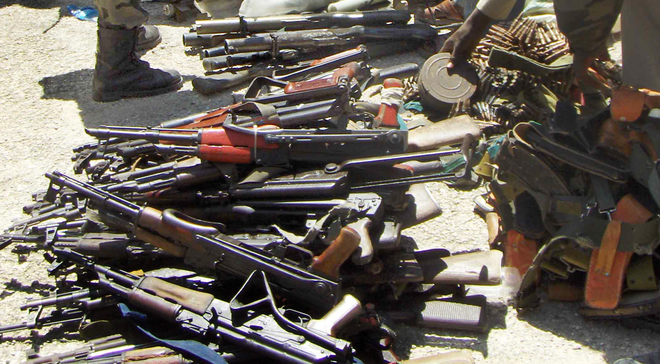 ADDIS ABABA, Ethiopia - Somalia has appealed to the United Nations and the United States to lift the arms embargo they imposed during the civil war.

Anadolu Agency caught up with Somali Ambassador to Ethiopia Mohamed Ali-Nur Hagi on the sidelines of an African Union meeting of the Permanent Representatives Committee (PRC) in preparation for the 30th Assembly of heads of state and government slated for Sunday.

The ambassador said the embargo had outlived its purpose.

The UN Security Council first imposed an arms embargo on Somalia in January 1992.

Although it has been relaxed in subsequent years, the embargo is still in effect. In 2014, the Security Council reaffirmed the overall arms embargo on Somalia.

“Our appeals for the lifting of the arms embargo are well justified due to the fact that Somalis are no longer fighting a clan-based civil war, which had lent a reason for the U.S. and U.N. to impose the embargo,” the ambassador said.

“So long as there is a national government that is committed to the country and to the international protocols and agreements, I think there is no reason Somalia is still kept under the embargo,” he said.

He added that the arms embargo had significantly eroded the capacity of the Somali government to fight the al-Qaeda-linked insurgency al-Shabaab that has been wreaking havoc in Somalia for the past decade.

“Sometimes al-Shabaab fighters have had more firepower than the Somali National Army,” he lamented.

While, conditions have greatly improved in Somalia with a peaceful transition of power, a process to implement institutions and a growing economic performance, the ambassador said his government wants a gradual takeover from the multinational peacekeeping force AMISOM.

“The implementation of the pact for AMISOM to hand over to the Somali National Army needs a lot of resources, a lot of planning,” he said. “I think some of the preparations are in place already, but at the moment, as the international community has already indicated, a gradual handover to the national army is in the best interest of the Somali government, people as well as in the interest of the region as a whole.”

According to the ambassador, the threat posed by al-Shabaab remains through the insurgents' capacity to be harmful has largely diminished over the years.

“With the help of AMISOM, we have been able to liberate more and more areas from the grip of al-Shabaab. Although there have been suicide bombings even in the capital Mogadishu, the number of attacks from the insurgents have gone down,” he said.