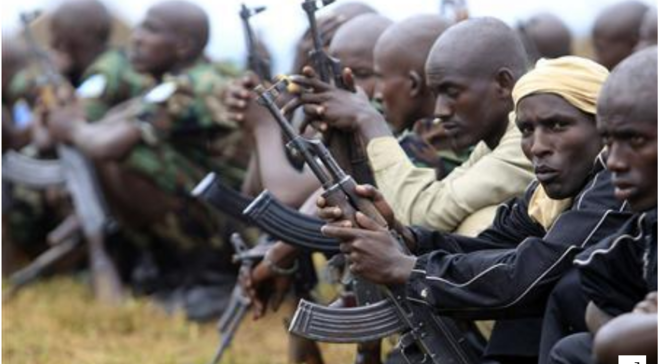 A source within Somali security agencies said the government has secretly bought the army from Djibouti, one of the 5 East African troop-contributing countries to the AU mission in Somalia, AMISOM.

The arms, including heavy and light guns, have been seized by Djibouti navy while heading to Yemen's Houthi rebels and subsequently sold to the Somali government, a move that violates the UNSC ban.

A cargo military aircraft brought the weapons to Mogadishu on June 22, just four days before the country celebrated the 58 years of Independence, which was attended by Djibouti defense minister.

VOA's Somali Service, citing a source familiar with the UN sanctions reported that Somali government failed to inform the United Nations Security Council about the weapons 5 days prior to the importation.

In March 2013, the UNSC partially lifted a decades-old arms embargo on Somalia, allowing the weak government in Mogadishu to buy light weapons to strengthen its security forces to fight al Qaeda-linked Islamists.

The UN Security Council imposed the embargo on Somalia in 1992 to cut the flow of weapons to feuding warlords, who a year earlier ousted dictator Mohamed Siad Barre and plunged the country into civil war.

In the past, Somalia has been reiterating appeal to lift arms embargo as the country is trying to rebuild strong national army capable of taking the security responsibility from the UN-mandated AU forces before 2020.