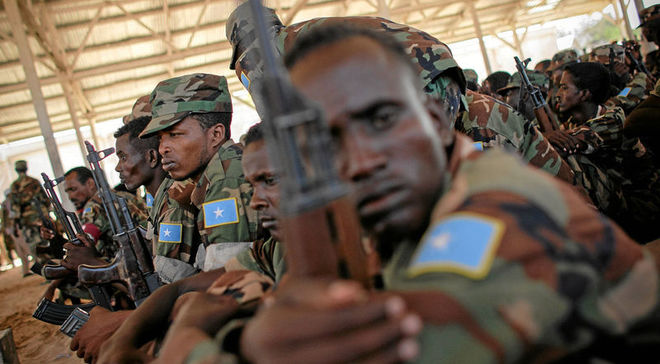 The country's Defense Ministry 99 Somali soldiers will be dispatched to the world's youngest nation, where government and opposition groups recently signed an agreement last September to end a five-year civil war.

Three other IGAD member states - Kenya, Uganda and Sudan will each send 499 to the conflict-riddled country to be part of the South Sudan joint peace force which is tasked with protecting civilians under UN.

Djibouti is also contributing 99 peacekeepers to the mission.

This came after Somali president, Mohamed Abdullahi Farmajo said his country would not hesitate to contribute soldiers to South Sudan while attending the signing of the peace deal in Addis Ababa, Ethiopia's capital in Sept.

President Salva Kiir of South Sudan inked an IGAD-brokered agreement with the main rebel group, allowing his arch-foe, Riek Machar reinstate in his former role as vice president after years of bloody conflict.

Somali government itself is under the protection of 22,000 AU troops from Uganda, Kenya, Burundi, Ethiopia and Djibouti who have been fighting al-Shabab, the deadliest extremist group in Africa since 2007.

Despite losing ground in recent times and losing top leaders in U.S. airstrikes, al-Shabaab militants are still able to launch attacks in different parts of Somalia, focusing on Mogadishu.