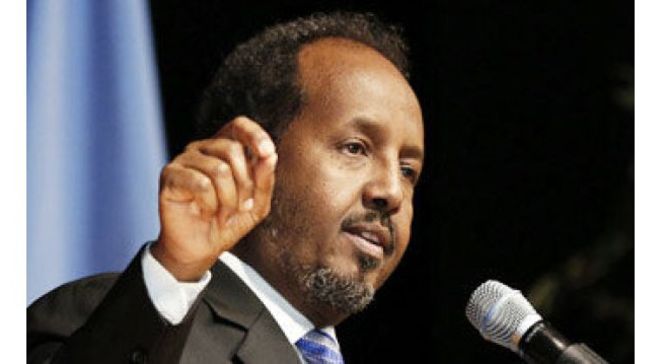 (Reuters) - Somalia's president said on Friday that nobody close to him had been involved in the unauthorised diversion of government weapons to Islamist militants and denied that a man U.N investigators linked to the arms trade had advised him.

President Hassan Sheikh Mohamud was responding to a report from the United Nations' Somalia-Eritrea Monitoring Group that Somali army weapons and ammunition were being diverted to open markets despite the government's pledges to prevent its arms ending up in the hands of al Shabaab fighters.

The report, seen by Reuters, also accused Musa Haji Mohamed Ganjab, a Somali businessman it said had acted as an adviser to the president, of being involved in arms deals.

"I do believe that U.N agencies are not there for accusing, but are there for improving the systems in place," Mohamud told France 24 television.

"The man you call Musa, there isn't someone called Musa who is my adviser or has ever been in an advisory position in my office. I would have liked the monitoring group to clarify where Musa Haji has ever become an adviser to me."

The allegations, which have also been denied by Ganjab, came in a confidential annex to the monitoring group's latest annual report that was left out of the 482-page version published earlier this week. Reuters has reviewed the unpublished annex.

As a result of the allegations of weapons diversion, the monitoring group recommended that the U.N. Security Council give international maritime forces the authority to interdict any sea vessel in international or Somali waters that is suspected of trafficking weapons or related material.

The group also called for the council to limit the number of weapons Somalia's government can import.

One senior Western diplomat said the council was seriously considering some of the group's recommendations, though Russia, which holds a veto on the 15-nation council, has raised objections.

Any confirmed connection between government figures and the siphoning of arms to al Shabaab could scare off foreign donors who have pledged billions to rebuild the shattered nation after decades of chaos.

The annex alleges Somali-Canadian businessman Ganjab cultivated ties with al Shabaab for years as he built a web of connections to boost his power within Somalia's political and security establishments.

"If he does something wrong he does that on his own capacity," Mohamud said. "I have not (had) someone ... called Musa Haji who has ever been an adviser to me in my presidency over the last two years in office."

When asked whether anybody close to him had diverted money or weapons to al Shabaab he said:

Ganjab has said the monitors' allegations were an attempt to undermine the Somali government and part of a politically motivated campaign to further destabilise the conflict-torn Horn of Africa nation.

In an email to Reuters, Ganjab insisted that he has never engaged in the arms trade or the distribution of weapons.