Somalia in mourning as constitution minister dies in UAE hospital 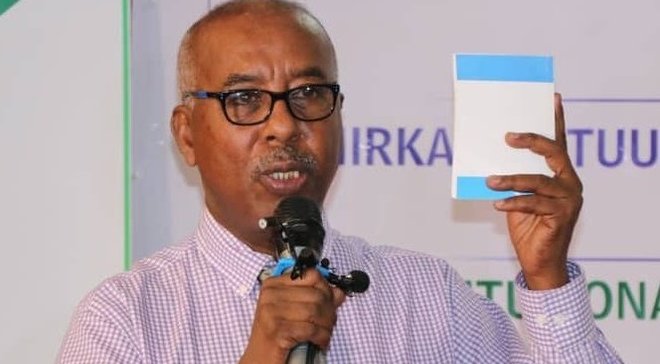 DUBAI, United Arab Emirates - Abdirahman Hosh Jibril, the Minister of Constitutional Affairs of the Federal Government of Somalia has on Friday breathed his last at Dubai Hospital, Garowe Online reports.

The country's top leaders, including President Mohamed Abdullahi Farmajo and Prime Minister, Hassan Ali Khaire have expressed their wholehearted condolences over the sudden death of the long-serving minister.

The government has not provided further details about the cause of the minister's demise. His body is expected to be flown from Dubai to Mogadishu for a state funeral, according to sources within the cabinet.

The late constitution minister who has been in Dubai for his daughter's wedding passed away a few hours after being admitted to the hospital, where he was reportedly undergoing treatment for a kidney complication.

The UN and U.S. missions in Somalia condoled to family, friends and Somali nation on the untimely death of minister and said he will be remembered as a principled and towering figure. "May Allah have mercy on Abdi Hosh".

"Honourable Minister Hosh played a critical role in Somalia’s historical legislative and governance progress. He was a kind man with the best interests of Somalia at heart," said the U.S. Mission to Somalia in a Twitter post.

The former lawyer, who joined in the Somalia politics in 2011 has served two times as minister of constitutional affairs in the past and current governments.