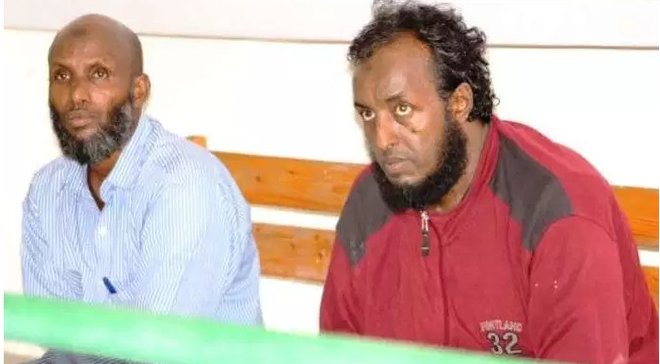 MOGADISHU, Somalia - A Somali military court on Thursday has handed down jail sentences for two men for membership of the Islamic State in Iraq and the Levant (ISIL) group, Garowe Online reports.

Nur who announced the verdict added that Abu Yasin was convicted of pledging allegiance to ISIL and trying to form Islamic State splinter faction in Somalia while Warsame accused of being the head of the group’s medical unit.

In October 2015, Abdulqadir Mumin, a former al-Shabaab ideologue who defected from the group pledged allegiance to ISIL leader, Abu Bakr al-Baghdadi and established a pro-Islamic State branch in Puntland state.

The increase in strength of the ISIL spin-off faction has grown significantly over the past two years, carrying out attacks in Puntland, receiving funds from Syria and Iraq, a report by UN sanctions monitors said in 2017.

The group captured the coastal town of Qandala in Puntland's Bari region in October 2016, declaring it the seat of the Islamic Caliphate in Somalia before being pushed out two months later by the state forces.

The military court often carries out sentences and executions to Al-Shabaab militants and soldiers who commit crimes despite condemnation from human rights groups.