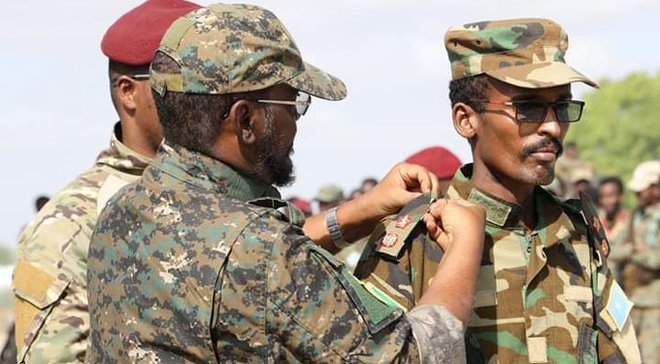 MOGADISHU, Somalia - A top Jubaland force commander has been promoted following his decision to reject a whopping $1 million to overthrow President Ahmed Madobe, amid escalating tensions between FGS and federal states.

Mahad Mohamed Islam, a Major in Jubaland's Darwish forces, sensationally claimed that he had been approached by spy chief Fahad Yasin for the offer, who would later connect him to President Mohamed Abdullahi Farmajo on phone.

In the offer, the FGS operatives promised to honor the reward had Mr. Mohamed agreed to help SNA to seize Afmadow and Dhobley towns, which are under surveillance of JSF and KDF.

During his visit to Afmadow on Sunday, Madobe held a closed-door meeting with security forces in the region, in which they discussed the latest development and the "incursion" of SNA troops in the Gedo region, reports indicate.

The Jubaland leader said: "I am fully satisfied with your patriotism to defend our territory. To counter the enemy, we ought to denounce their compromise and fight for our people".

Of the most promising incident, Madobe, who has been under siege from FGS, promoted Major Mahad Mohamed Islam to the rank of Lieutenant Colonel, for his "unparalleled patriotism" for allegedly refusing to participate in the coup.

As Lieutenant Colonel, Mahad is now a fully recognized member of Jubaland army staff. However, it is yet clear whether he was transferred from Afmadow or he will still remain in the region.

In a video posted on Facebook, Mahad said besides the $1 million gifts, he was also promised to be incorporated within SNA and subsequently, have his family flown to Turkey for safety.

Mr. Yasin, he added, facilitated sending of a total of $110,000 for logistics before the planned raid at Afmadow. However, the March. 11 plan was aborted after Mahad withdrew to FGS' surprise.

The money, he said, was diverted to Jubaland Ministry of Finance. But he had initially received threats including "forcing him to run away from Somalia" for failing to execute the plan.

Villa Somalia has remained mum about the grave allegations, although there have been efforts to reach out to "dissidents" by FGS to "cement" Farmajo's grip in Somalia ahead of December polls.

For months now, FGS has been at loggerheads with federal states over among others, controversial electoral and petroleum laws, with various member states calling for "urgent dialogue" to quell tensions.

Already, SNA troops have seized Dhusamareb in Galmadug and Balad-Hawo in Jubaland, leading to persistent pressure from Somalia's partners, who insist that the soldiers' presence in Gedo "should be reduced since it promotes Al-Shabaab's stakes" in the region.

But it's Madobe who has been in "bad records" of Farmajo, leading to their fallout in recent weeks. For instance, Mogadishu denounced his August 2019 victory, in which Kenya was accused of "aiding his victory".

A defiant Madobe has made several trips across the Jubaland state, touring the Al-Shabaab dominated Lower and Middle Juba in the process. His trips have been used for morale-boosting following SNA raid in Balad-Hawo.

Do vicious has been the stalemate that Somalia accused Kenya of interfering with its domestic affairs. But Nairobi refuted the claims, terming Balad-Hawo clash between FGS and Jubaland forces as "violation of our territorial integrity".

However, both sides have already reached out to one another, even incorporating Ethiopia, which also plays a role in Somalia's security.

The leaders from the three nations were scheduled to meet on Monday [today] but the tripartite summit has since been postponed due to coronavirus pandemic.