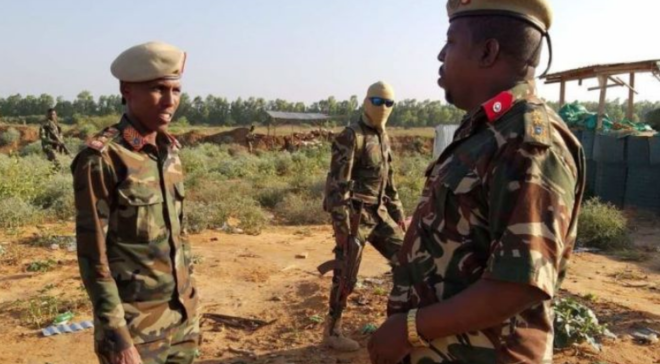 MOGADISHU, Somalia - A major reshuffle with fresh appointments among the top brass of the Somali army and air force have taken place with new appointments at key commands, Garowe Online reports.

Mohamed replaces General Odawaa Yusuf Rageh who was moved to the infantry chief post in the mini-reshuffle. He has been deputized by General Abdirashid Abdullahi Shire.

Meanwhile, Admiral Abbas Amin Ali becomes the new Commander-in-chief of the Somali navy, replacing Admiral Hassan Nur who was sacked by Somali president last December while he was in office 4 months.

The move comes days after president Farmajo pointed finger of blame at military commanders for failure to defeat Al-Shabaab in two years, a pledge he made after his election in February 8, 2017.

Farmajo admitted delay in salary for the military which led sections of SNA to vacate the frontlines and bases in Lower-Middle Shabelle regions, risking the hard-earned gains against Al-Shabaab.

In addition, Mogadishu has seen a series of Al-Shabaab attacks, including car bombs on government buildings, hotels and restaurants that left dozens of civilians and officials in the past few weeks.

On Saturday, Somali lawmakers have called on the Federal parliament to include the security lapse in the capital on the top agenda.