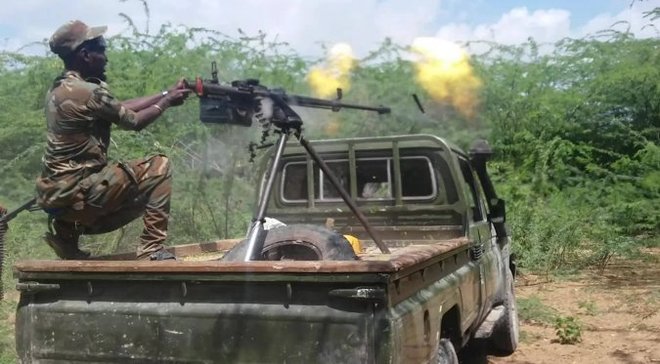 BELEDWEYNE, Somalia - At least 30 militants were killed and several others injured in a major onslaught against the Al-Qaeda-linked extremist group Al-Shabab in Hiran region on Tuesday, Garowe Online reports.

Mohamed Nur Agajof, a military spokesman in the region said the fighters died during an army operation in several areas located on the outskirts of Beledweyne, Mahas and Mataban towns in central Somalia.

Speaking to Garowe Online, Agajof added that the Somali National Army [SNA] forces seized a command centre and recovered military equipment from Al-Shabab following a fierce combat with the insurgents.

"The skirmish firstly broke out near Mahas, where at least 14 Al-Shabab members were killed whose dead bodies were brought to the town under Somali government control," said the army spokesperson.

He said another fighting occurred in villages along the highway connecting Beledweyne, the regional capital of Hiran province to Mahas after SNA raided Al-Shabab base that the militants used to organize the attacks.

However, Al-Shabab which is waging a decade-long insurgency to topple the UN-backed Federal government in Mogadishu is yet to release its own statement concerning on the latest military assault in Hiran region.

The operation comes as Somali security forces backed by their allied African Union peacekeeping forces are preparing for a final offensive aimed at flushing out al-Shabab fighters from the entire Horn of Africa country.