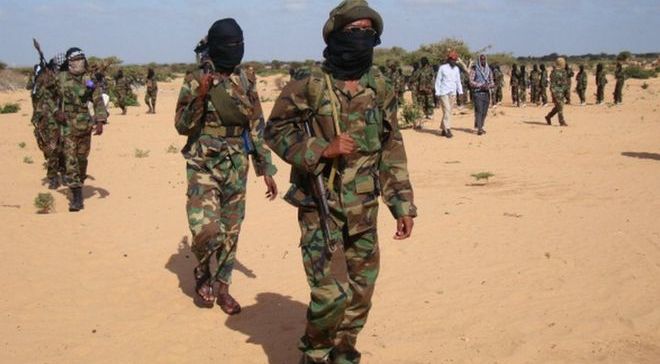 MOGADISHU, Somalia - Blasts and gunfire heard in Mogadishu after armed militants launched an attack against a Somali military base in Mogadishu, the Somali capital on Saturday midnight, Garowe Online reports.

The assault began with grenade explosions followed by heavy gunfire erupted at the army camp in Mogadishu's Wardhigley district. At least one soldier and a civilian were confirmed dead in the gunfight.

Security sources told GO that government soldiers managed to repulse the attack after engaging in a fierce gun battle raged on for minutes with the fighters belonging to the Al-Qaeda-affiliated Al-Shabab group.

"The attackers fled the area immediately after encountering stiff resistance and suffered grave casualties," said a Somali military in Mogadishu, who spoke to GO on condition of anonymity.

The raid took place as the minister on Internal security for the Federal Government of Somali, Mohamed Abukar Islow, along with other army and security chiefs were inspecting military barracks in the capital.

Local residents said the troops carried out a massive operation early on Sunday morning in Hamar-Jajab neighborhood, in response to last night's militants' onslaught and detained several suspects in connection with the incident.

Al-Shabab was driven out of the seaside city in 2011 by Somali and African Union forces, but, the extremist group still capable of staging attacks, including car bombs against government offices and popular hotels.