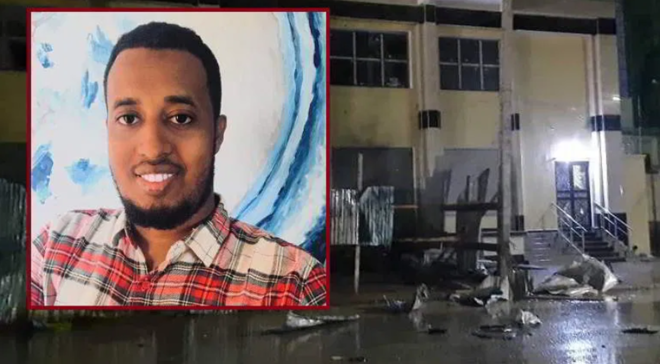 MOGADISHU, Somalia – At least one person was killed and three others wounded after a vehicle belonging to deputy security minister touched off a roadside bomb in Mogadishu on Saturday evening, local police said.

The incident occurred in Taleh junction in the evening at around 7:30 p.m. local time. The injured, including Ilyes Mohamed Sheikh Abdikarim working with the security ministry who were shifted to a nearby hospital for treatment.

Abdikarim has succumbed to severe injuries sustained in an explosion that has resulted from an IED hidden on the side of the road at a construction site along the busy street connecting the city’s airport to the presidential palace.

The late civil servant has been travelling in a vehicle belonging to the deputy security minister Abdi Abdinasir Said Muse at the time of the blast. He was a nephew of a former justice minister and current MP Farah Sheikh Abdulkadir.

No group has yet claimed responsibility for the bombing, but police pointed the finger of the blame at the Al-Qaeda-linked militant group Al-Shabaab which often carried out such attacks in the city and elsewhere in Somalia.

Last week, the head of Somalia's military escaped unhurt and one civilian was killed on Monday when a suicide attacker drove a bomb-laden car into a convoy in the capital Mogadishu. Al-Shabaab group said it was behind the attack.

General Yusuf Rage was in the convoy near a military hospital in Mogadishu's Hodan district when the blast struck. Rage was appointed last August at the age of 32, making him the youngest army chief in Somalia's history.

The Somali civilians continue to bear the brunt of armed conflicts as many civilians were killed and others wounded in conflict-related incidents and terror attacks in the Horn of Africa nation, which was beset by 3 decades of anarchy.

Since 2008, the armed group has been fighting to overthrow the central government and establish its rule based on its own harsh interpretation of Islamic law.

Al-Shabaab was driven out of Mogadishu by Somali and AU troops in 2011. But the group still controls swaths of territory in the south and conducts attacks, particularly suicide blasts, against the government and international targets.