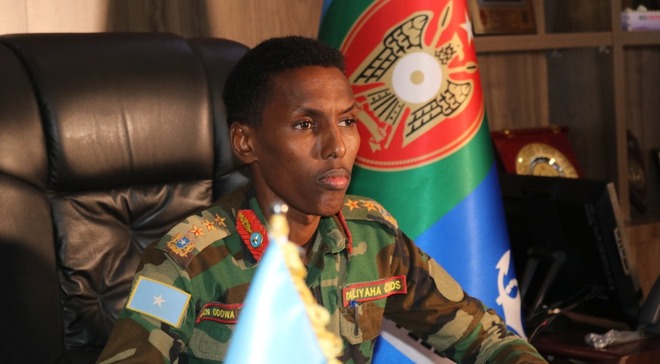 MOGADISHU, Somalia - Somalia's Chief of Defense Forces General Odowaa Yusuf Rageh survived a suicide bomb attack in Mogadishu on Monday, reports indicate, in an attack which further exposes security lapses within the Horn of Africa nation, which is struggling to rebuild after years of turmoil.

The eyewitness said a car laden with explosives was detonated just near the convoy of Gen. Odawaa, who is understood to have been leaving the Defense Ministry compound within Mogadishu, a city which has been enjoying relative stability in recent months.

The car was detonated and a loud explosion was heard from the scene, with reports indicating that the assailants unleashed near the Tarabunka area of Mogadishu. The convoy was escorting the military's chief at the time of the explosion.

An eyewitness who spoke to Garowe Online said the blast was engineered by a suicide bomber who targeted the convoy of the military chief. Tarabunka road leads to defense ministry HQ in Mogadishu, which is strategic for the Somali National Army [SNA] due to its huge compound that accommodates military activities.

The military chief was leaving the MoD headquarters but details about his itinerary remain scanty. The number of casualties is not yet known but the military chief is said to be "safe" after evacuation by the elite squad which guards him.

“A bomber driving a car laden with explosives has tried to breach the convoy. The bomber has ignored several warnings and then the car was shot and as result of the shooting, it exploded,” Ismael Mukhtar, a government spokesman confirmed, quoting the army chief.

Although attacks against military officers are common in Somalia, the attempt against the highest-ranking general is the first in as many years. It is likely to attract offensive against Al-Shabaab militants, who are associated with such attacks, with up-scaling of his security details also another possibility.

No group is yet to claim responsibility but the nature of the attack resembles that of the Al-Shabaab, which has been targeting military bases in recent months. The group has tried to run over bases within Mogadishu and across the vast Shebelle and Jubba regions.

In June, the militants detonated an explosive outside a house of a high ranking military officer with Lower Shebelle. Days later, a suicide bomber almost ran over the Turkish-run military base in Mogadishu in an incident that left the terrorist and a civilian dead.

The attack against the military chief also comes barely a month after disgruntled soldiers waged a short-lived mutiny in Mogadishu where they demanded to pay. The troops claimed that they had worked for almost 20 months without pay.

However, Rageh, who issued a statement a day later, accused the officers of "indiscipline", adding that those who had gone days without getting their dues had not been registered in the biometric process which was initiated as part of stringent measures to improve accountability in the military.

At 33, Rageh is the youngest SNA soldier to serve as the Chief of Defense Forces, a position he was promoted to last year by President Mohamed Abdullahi Farmajo. He's credited for leading a success crackdown against Al-Shabaab militants.

Trained in Uganda, Gen Rageh has waged ongoing crackdown against the militants across Somalia, a process which is supported by the US Africa Command and the African Union Mission soldiers who are set to leave in 2021 from the war-torn nation.

Next year, the army general would have his first fierce test on the ability by the SNA to counter Al-Shabaab militants, with IS-Somalia militants poising threat from the north. So far, hundreds of militants have been killed this year, with the elite Danab and Gorgor soldiers taking credit.

Somalia has struggled to build a strong and dependable military since the ouster of former ruler Siad Barre. In the 70s and 80s, Somali had one of the most reliable military in Africa, which took part in liberation struggles especially in Mozambique, Burundi, and Rwanda.