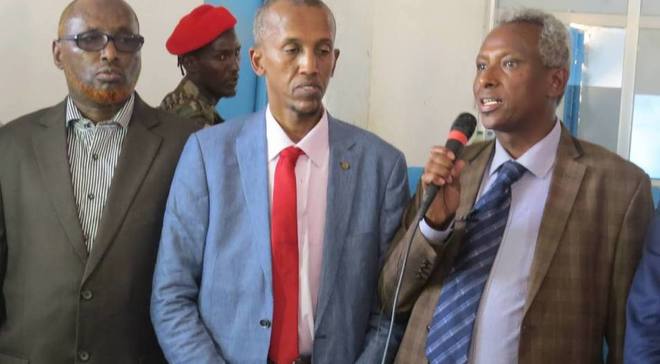 Upon arrival on Adado Airport, the delegate was warmly received by Galmudug ministers, state parliamentarians, elders and members of the civil society.

The delegate which included members from the Federal Parliament's Lower and Upper Houses is expected to hold talks with Galmudug Parliament and election committee about the forthcoming presidential election in the region.

During the press conference, Minister Juha noted that he will hold discussions with state's stakeholders and visit drought-stricken areas in the region.

Additionally, Minister Juha’s delegate is believed to be aiming to break a deadlock between the election committee and Ahlu Sunna Waljama'a who refused the scheduled election date. The pro-government Ahlu Sunna Waljama'a controls Dusamareeb town, a strategic town located in central Somalia.

Earlier, Somali Federal government has urged Galmudug's stakeholders to reach an agreement that will pave the way for inclusive election in the region.