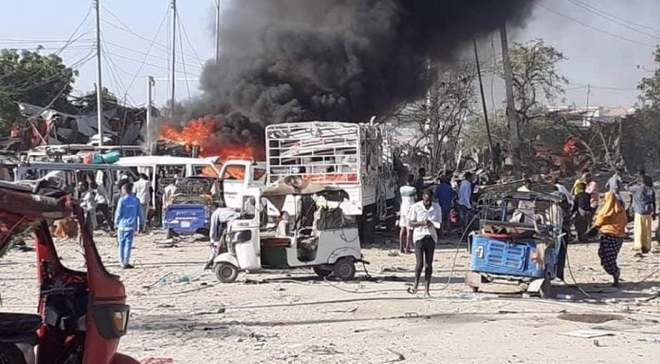 MOGADISHU, Somalia - Experts on Somalia say they doubt the claim by the Somali government's intelligence agency that an unnamed “foreign country” planned the December 28 attack in Mogadishu that killed scores of civilians.

The National Intelligence and Security Agency of Somalia did not name the accused country, nor did it offer evidence for its explosive claim of foreign responsibility.

But a commentator for a Turkish newspaper asserted on Sunday that “the UAE is behind the bombing in Mogadishu.”

“Evidence left behind from the bomb vehicle that exploded in Mogadishu leads us to the UAE,” wrote Ibrahim Karagul, a senior columnist for the Yeni Safak daily. “A massacre was conducted and the traces lead us to Mohammed bin Zayed.”

Karagul did not specify what evidence he was referring to in linking the United Arab Emirates crown prince to the attack that claimed at least 81 lives.

But three analysts knowledgeable about Somalia's civil war suggested on Tuesday in messages to the Nation that the Somali terrorist group al-Shabaab probably acted on its own. The experts reject the contention of UAE involvement.

“UAE is staunchly opposed to Shabaab and everything it stands for.”

The Somalia specialist added, “Al-Shabaab already has years of expertise in the assembly of car and truck bombs. Why would it need help from any foreign government?”

In addition, a spokesman for Turkey's ruling party made no mention of the UAE in a statement on Tuesday that explicitly condemned al-Shabaab,

At the same time, there are indications that the UAE has acted in ways beneficial to Shabaab.

A United Nations report last year estimated the wholesale value in the UAE of illicit Somali charcoal exports to be $150 million a year.

Shabaab has reaped considerable profits from the charcoal trade which is prohibited under UN sanctions.

The UAE's ambassador to the UN did not comment on that finding, but she did tell the Reuters news agency that her country is “in full compliance” with sanctions related to Somalia.

Relations between the governments of Somalia and the Emirates, formerly close allies, have also deteriorated markedly in recent months.

The UAE abruptly ended its capacity-building and humanitarian aid programs for Somalia in April after Somali authorities confiscated nearly $10 million in cash aboard a UAE airplane in Mogadishu.

The Emirates said the money was intended to cover the salaries of hundreds of Somali government soldiers whom it had been paying for years.

The UAE has also been displeased with the Somalia government's diplomatic support for rival Gulf state Qatar.

Turkey, now a major benefactor of the Somalia government, has been aligned with Qatar and against the UAE in a dispute that has roiled the Arab world.

Two Turkish citizens were among the dead in the December 28 attack in Somalia's capital.

But these are not sufficient reasons to link the UAE to the terrorist outrage in Somalia, says Joshua Meservey, a Horn analyst at the Heritage Foundation, think tank in Washington.

“I find the claim of UAE’s involvement implausible,” Meservey told the Nation. “It has bad relations with Mogadishu at the moment, but it still makes no sense that the UAE would partner with an avowed enemy (al-Shabaab), and particularly not for an attack that has no strategic benefit for the UAE.”

Noting that an Istanbul-based publication is the source of the allegation, Meservey added that Turkey “would delight in a chance to embarrass or discredit the Emiratis in a region in which both countries (and others) are competing for influence.”

“So I suspect the accusation of foreign involvement in the attack is a way for Mogadishu to please its patrons.”

Stig Jarle Hansen, the Norway-based author of a history of al-Shabaab, also placed the claim of UAE involvement in the context of Somalia's friendly ties with Turkey and frosty relations with the Emirates.

Hansen noted that the UAE has refrained from attacking civilians even while it has been waging war in Yemen. “I think this is Shabaab,” he declared in regard to the Mogadishu bombing.