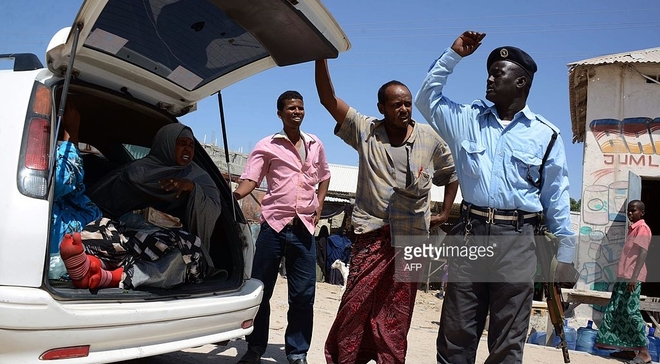 MOGADISHU, Somalia- At least one person was killed, and two others including a policeman were wounded in grenade attack in the capital Mogadishu on Monday, Garowe Online reports.

An eyewitness told GO that assailants thought to be Al Shabaab members have tossed a grenade bomb at a Police checkpoint at KPP junction in Mogadishu during Morning rush hour.

"Two men threw a hand grenade at a security checkpoint in KPP area in Hodon district, killing a woman, while wounding two others, including a policeman," witness added.

A local reporter at the scene said the suspects have fled immediately before the arrival of the Somali security forces, however, the authorities cordoned off the area for investigation.

"The suspected Al Shabaab assailants approached the cafe on foot and tossed the hand grenade at the police checkpoint, before escaping shortly," he said.

No group has yet claimed responsibility for the attack, but local police officials said they believe Al Shabaab was mastermind of the grenade assault that left one civilian dead.

This is the first bomb attack in the Somali capital of Mogadishu since the election of the new Somali President Mohamed Abdulahi Farmajo on February 8.