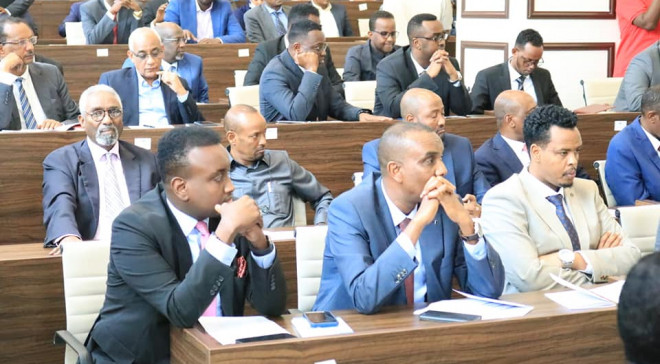 MOGADISHU, Somalia - The Somalia-based Al-Qaeda-linked Al-Shabaab militants on Monday targeted parliament buildings in the capital Mogadishu, in what could further raise questions about the security of the Horn of Africa nation, which seems to be compromised.

According to witnesses, the group, which has since taken responsibility for the attack, fired mortar shells that landed in the vicinity of parliament. Usually, parliament is one of the most protected areas within the fragile country, which has struggled with instability for three decades.

At the time Al-Shabaab fired mortar shells, reports indicate, legislators were in a session, deciding the date for elections of the house leadership team. Although the group did not disclose who its target was, it is known to target senior government officials and politicians.

Parliamentary staff members within Villa Hargeisa were injured in the mortar attacks, with preliminary reports suggesting the mortars were fired from a close range. The premises are heavily guarded but it's unclear how the militants managed to penetrate the security perimeter.

A few weeks ago, Al-Shabaab militants killed Amina Mohamed Abdi, a female opposition legislator who has been a strong critic of outgoing President Mohamed Abdullahi Farmaajo. The death triggered political tensions in Somalia, with opposition leaders linking the government to the assassination.

Reports further indicate a number of people were injured in the latest attack which has been condemned by government officials. Those injured were rushed to various hospitals within Mogadishu, which hosts parliament and executive.

Prime Minister Mohamed Hussein Roble and opposition chief Abdirahman Abdishakur Warsame were among those who condemned the attack, terming it cowardly. On his part, Abdirahman asked authorities to consider relocating parliament to the Afisiyoni tent within the airport.

"The mortar did not appear to be coming from far away and is part of an attempt to delay the elections," said Abdirahman Abdishakur who called for the next sessions to be moved out of Villa Somalia to Afisyoni at the airport.

"Today's attack was a cowardly act aimed at intimidating the parliament in the process of fulfilling its duties," added Roble, accusing militants of trying to disrupt MPs from executing their mandate.

"It's indeed alarming the unprecedented surge in such attacks often dubbed politically staged attacks. I urge Somalia's partners to ensure the safety of the MPs and the legislative houses," said Mohamed Abdirahman, a senior Somali security expert, who condemned the attack.

The attack comes a few days after new MPs accused the government of plotting to delay parliamentary elections which are yet to be concluded. The government has in the past been accused of colluding with Al-Shabaab militants to engineer chaos in the country.

The attack comes amid reports that the late opposition MP Amina Mohamed Abdi was killed by a former Al-Shabaab militant in Beledweyne last month who had been recruited by the National Intelligence Security Agency [NISA], if confirmed it would be a clear indication that the government has been working with Al-Shabaab sympathizers.

Al-Shabaab militants are linked to criminal activities including disruption of government activities in the country. Although the group controls huge swathes of rural central and southern Somalia, security forces have managed to liberate a number of strategic towns.

Parliament has set elections for the speakers of the bicameral legislature for April 26th and 27th. Senators will be the first to pick their speaker before MPs follow suit the following day, after which the MPs will elect a president of the federal government of Somalia.

The House has also increased registration fees for both presidential candidates and the leadership of the parliament. It was approved that Presidential hopefuls pay $40,000 from $30,000 while speakers and deputies will pay $20,000 and $15,000 respectively.