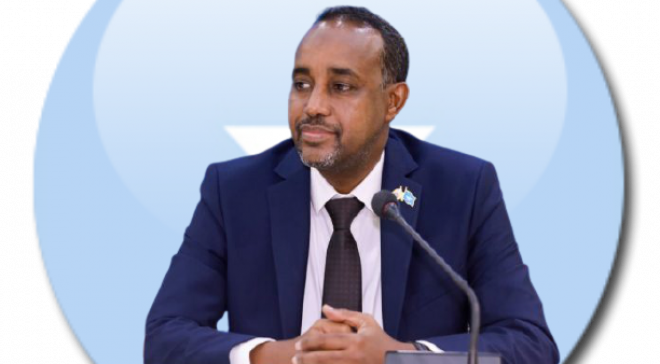 MOGADISHU, Somalia - Prime Minister Mohamed Hussein Roble will be heading to Cairo, Egypt in the coming days, The Garowe Online has established, just a few days after he ended a three-day tour to Kenya, which had reportedly raised questions in Villa Somalia.

During his stay in Nairobi, Roble anchored his message on the need to establish concrete bilateral ties with Kenya, which has suffered numerous setbacks in the past year. The Kenyan President Uhuru Kenyatta also pledged to ensure the diplomatic ties are fully restored.

There were concerns that Uhuru might have asked Roble to consider an out-of-court settlement for the controversial Indian Ocean maritime border row, which is currently being deliberated at The Hague. However, the Office of The Prime Minister denied the reports.

Although Garowe Online has not established the main agenda for Roble's planned trip to Egypt, it comes at the time Somalia is holding elections. A number of states key among them Puntland and Southwest have already concluded senatorial polls.

On August 7, Roble met with the Egyptian Ambassador to Somalia Mohamed Ibrahim Nasr at his office in Mogadishu, discussed the ties between the people and the two governments and how to strengthening their cooperation.

Roble, who has largely been hailed for steering the exercise, has not yet come out open on what he intends to do to end the stalemate. Somaliland usually elects representatives to the federal parliament but back in Hargeisa, there is a formidable government that is independent of Mogadishu.

Last year, there were claims that Egypt was keen to build a military base in Somaliland, something which angered Mogadishu. Cairo, reports indicated, believed such a base would help expand her dominance in the Horn of Africa, something which was opposed by Ethiopia.

Also, Mogadishu had offered to reconcile Egypt, Ethiopia, and Sudan over the controversial Nile Dam, which Egypt had raised issues about. To date, refilling of the dam has been a major issue, raising suspicions both in Cairo and Addis Ababa.

The full details about Roble's impending trip still remain scanty. For the last eight months, Roble has made a couple of trips outside Somalia, something which also raises concerns that he might decide to join the presidential race in October.