Somalia prepared to take over security from AMISOM, says Adviser 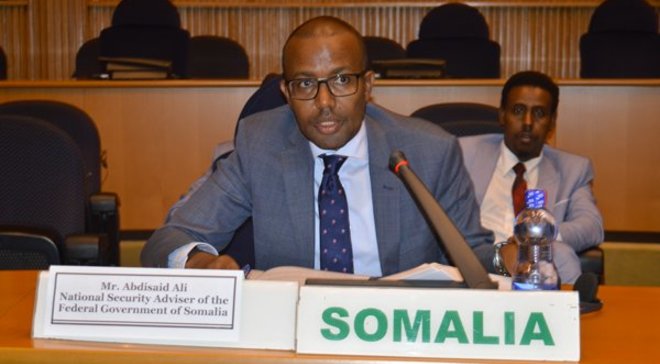 MOGADISHU, Somalia - The Somali government has assured the African Union (AU) and the United Nations of its commitment to take over security responsibilities from the AU troops in the country as stipulated in the transition plan.

National Security Advisor of the government, Abdisaid Musse Ali, told a joint team from the AU and the UN reviewing the Mission that there was political will from the presidency and the government that was ready to handle the country's security.

"The transition plan represents a significant change in the planning and delivery of the security in Somalia. It's not business as usual," he said in a statement issued on Sunday from AMISOM.

Ali asked the team not to judge Somalia by its past but what it is today and what it will be in future, noting that the transition plan is aimed at securing Somalia, through the implementation of the security architecture developed and adopted by the government in 2017.

The AU-UN joint review team is in Somalia meeting various stakeholders and will present its report to the UN Security Council ahead of a meeting to decide on the extension of AMISOM's mandate which expires on May 31.

Francisco Madeira, the Special Representative of the Chairperson of the African Union Commission (SRCC) for Somalia said the peacekeeping force had always had an exit strategy.

Madeira who is also the head of AMISOM said the Mission has fully identified itself with the transition plan developed by the Somali government, with the help of development partners.

"All the things that are showing up now, in this transition plan, were already at the center of AMISOM's action plan. We need to build a state and building a state meant the Somalis needed to take responsibility not only of the military but also of the administration of the country," he added.

Madeira added that the peacekeeping force had envisaged the transition plan in driving out al-Shabab in most places and rebuilding institutions that are now ready to be handed over to the Somali government.

He said he had seen profound determination from the government to take over the responsibilities currently being undertaken by AMISOM in the country.

AMISOM has developed a conditions-based transition plan to transfer the national security responsibility from the AU troops to the Somali security forces guided by the rule of law and respect for human rights.

According to AU mission, the tasks which will be undertaken through joint efforts between AMISOM and Somalia National Army include securing of Main Supply Routes, securing of key population centers; as well as mentoring the Somali security forces in the military and Police.

Walid Musa Abdelkarim, the head of the UN delegation to the Joint AU-UN Review of AMISOM, acknowledged that there had been significant political progress since the joint mission was in Somalia a year ago.

"We now are convinced that the geopolitical position or status of Somalia is rising, increasing every day because of global events and therefore we will have this time a more serious tone in what we do," Abdelkarim noted.