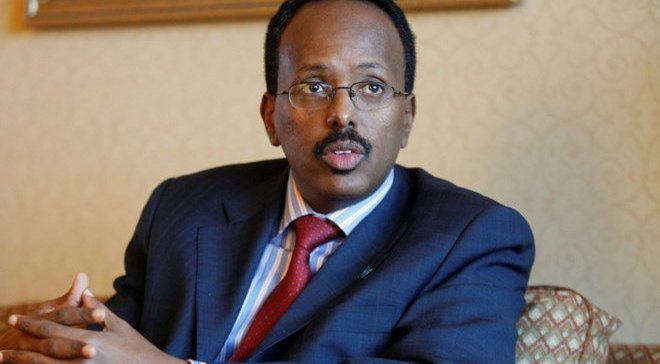 MOGADISHU, Somalia- New Somali President Mohamed Abdullahi Farmajo has appointed interim staff for the presidential palace on Thursday, after taking over the office from his predecessor, Garowe Online reports.

After assuming the office, the new President Farmajo released an immediate press release, announcing the appointment of an interim team holding several positions in Villa Somalia, including national security adviser.

Hussein Moallim Mohamud who is serving as a senior National Intelligence and Security Agency (NISA) official was named as the interim National Security Advisor to President Farmajo.

on the other hand, Siyad Mohamed Shire, and Somali Ambassador to EU, Dr Ali Said Fiqi were named interim Chiefs of protocol and Staff respectively, according to the statement from the Presidency.

"I would like to announce few appointments that will serve as my interim team during the transitional period," President Farmajo said in a statement sent to the media.

The new President of Somalia Farmajo has thanked former President Hassan Sheikh Mohamud for his work and services to the country and citizens following peaceful power transfer today in the capital Mogadishu.