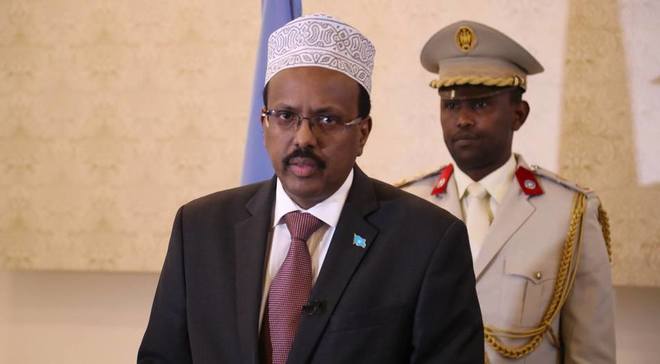 MOGADISHU, Somalia - Somali President, Mohamed Abdullahi Farmajo who was scheduled to address the Parliament on Saturday failed to appear before the national assembly, Garowe Online reports.

The delay came after President Farmajo held a closed-door meeting with the speakers of the Parliament's Senate and lower house chamber, Abdi Hashi and Mohamed Osman Jawari at Villa Somalia last night.

Prior to the talks, Hashi and Jawari met with 50 elders from Galmudug, who called on the Federal government to stop the alleged intervention in the state's internal affairs and current political turmoil.

The elders have warned the consequences of holding a Presidential vote in Adado next Sunday, which is aimed to oust the sitting leader Ahmed Dualle Gelle Haaf by figures backed by the Somali government.

The elders' call has dominated the overnight meeting in the state house, with reports that Hashi and Jawari urged Villa Somalia and PM Hassan Ali Khaire to swiftly halt meddling Galmudug.

Sources revealed to GO that during the talks, President Farmajo has promised to work on canceling the planned election in Galmudug, in a bid to prevent the state from plaguing further into political chaos.

On the other hand, Farmajo has been asked to postpone his plan to appear before the Parliament due to lack of prior consultation, and possible resistance from the MPs who not ready to the President meeting.

The other key issue led to the postponement is said to be the sensitivity of the date of the President's move to face the national assembly, the 21st October, a day of a coup in Somalia in 1969.

PM Khaire said while meeting with youths at emergency response center in Mogadishu that President Mohamed Abdullahi Farmajo was going to impose a state of war in the country today following Oct 14 truck bombing.

This comes as the country is mourning 358 people killed in a powerful explosion at K5, a busy junction in the heart of Mogadishu. Noo group has yet claimed responsibility for the horrific attack.