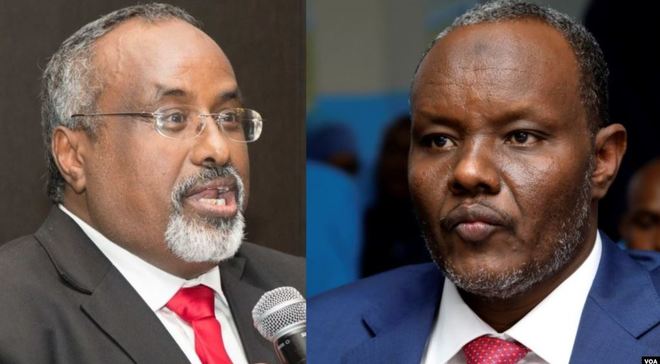 MOGADISHU, Somalia - Authorities in Somalia have quarantined two regional presidents for fear of contracting the deadly Coronavirus, reports have emerged, with the figures of new infections rapidly raising.

According to reports, Waare was among those who came into contact with his Justice minister Khalif Mumin Tohow, who succumbed to the deadly virus on Sunday in Mogadishu.

The president was leading a cabinet session in Jowhar town, hours before the minister fell ill and subsequently rushed to Mogadishu for treatment. The number of people who might have come into contact with him remains unclear, officials added.

For the next 14 days, the regional leader will remain is self-quarantine as authorities rush against time to trace dozens of people who also came into contact with the former state officers, who was laid to rest on Sunday.

Tohow was also a holder of a British passport, a common practice for virtually all Somalis, who were granted asylum abroad due to inter-clan conflicts in the 90s. He was the second person to succumb to the virus, health officials said in a statement.

In his tribute, Waare described the former minister as a "hard-working" civil servant who always "protected the rights of the poor" by taking state agencies forward when pursuing justice on their behalf.

And Laftagareen, who has been at the realm of power in Southwest for the last two years, is also self-quarantined for fear of being asymptomatic. He's jointly isolated with the state's speaker Ali Said Fiqi, reports indicate.

The three are the first senior-most people in Somalia to go for self-quarantine, a basic approach in containing the spread of the disease. Health officials are set to pick their samples for further analysis.

As of Monday, Somalia had registered 60 positive Coronavirus cases. In a statement, the health department announced 35 more new cases, three of them from breakaway Somaliland state.

However, 52 of the individuals are self-quarantined in their respective homes under the close supervision of health officials, two admitted in critical condition at Martini Hospital while another one closely being monitored at Halane Basecamp. Only one person has recovered, reports indicate.

But the cases could stand at 62 on Tuesday after semi-autonomous Jubaland state confirmed two COVID-19 cases after having gone through essential tests in Kismayo.

"Two patients, 35 yr old female and 17 yr old male, with flu-like symptoms and recent travel history, were tested in Kismayo yesterday," Mursal Khalif, the state's health minister tweeted. "And have been confirmed, in the last 30 minutes, to be positive for COVID-19!
Jubaland Ministry of Health is taking appropriate steps."

The dangerous disease has already claimed the lives of senior Somali citizens, among them former Prime Minister Nur Adde and renowned musician Ahmed Ismail Hussein. Both died in London in quick succession.

International partners pledged to help Somalia manage the pandemic. On Sunday, the team which also includes United Nations lauded the country's strict measures so far taken to minimize the spread.

This week, Somalia is set to test more numbers following the delivery of test kits. Opposition FNP has also called for close collaboration between the federal government and federal states in the ongoing COVID-19 fight.