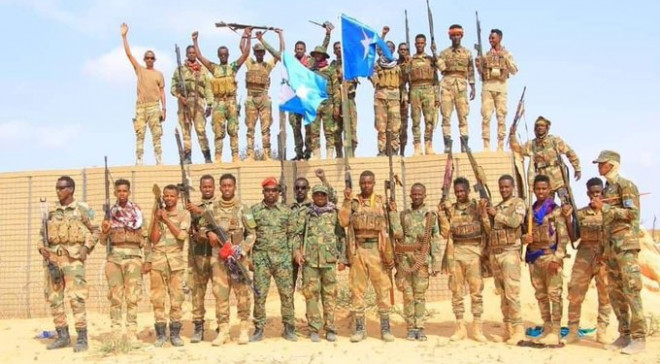 MOGADISHU, Somalia - The Somali National Army [SNA] has retaken Ba'adweyn town in Mudug, central Somalia, top military officials said, hours after deadly clashes with the Al-Shabaab militants, who had dislodged them from the strategic center.

Al-Shabaab captured the town a couple of weeks ago after a fierce gunfight with the government troops, who were forced to immediately abandon it for their own safety. They have been collecting taxes from the locals besides plans to set a parallel administration.

Pictures by state media show military personnel from the 21st division raising the Somali flag at their former base. The town in Galmudug state changed hands in recent weeks, and Al-Shabaab has been keen to stay around in their bid to ouster fragile UN-backed Somalia administration.

According to the state media, the national army managed to destroy four bases that had been established by the militants in the town, besides removing several Improvised Explosive Devices [IEDs] which had been implanted by the terrorists.

Early on Friday, a car bomb went off near a military base in the vicinity of Al-Shabab-held Ba'adweyne town in Mudug, central Somalia, with reports indicating that the militants were prepared for an offensive to push the military further from the outskirts of the town.

Security officials confirmed that the blast was foiled after the government forces shot the driver. No casualties on SNA were reported, but the militants are said to have suffered immense losses during the foiled attack. It's after the attack the military managed to retake the town.

The Al-Qaeda-affiliated Al-Shabaab however, claimed it launched a car bomb attack on Friday on a military base housing Somali army forces and Galmudug regional troops near Ba'adweyne, adding that it managed to kill four soldiers besides destroying one SNA vehicle.

In recent weeks, Ba'adweyn town has been an epicenter of the clashes between the government troops and the Al-Shabaab militants. The military has heightened operations against Al-Shabaab in Middle Shabelle and parts of Lower Shabelle and Jubba ahead of AMISOM exit later on this year.