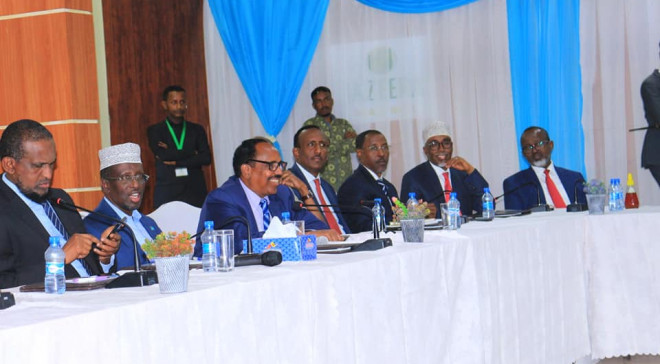 MOGADISHU, Somalia – The opposition candidates in Somalia are calling on the international community to recognize the President as a spoiler, a day after the disputed electoral commission announced voting dates.

In a statement, 14 presidential hopefuls accused Farmajo of posing a threat to the country’s stability after failing to hold a free and fair election at the end of his 4-year mandate expiring in February 2021.

They condemned the decision by the “unconstitutional” Federal Electoral Implementation Team (FEIT) to unveil the election timetable on Wednesday, describing the move as the beginning of the election rigging.

“He [President] decided to hold an election, where are both player and referee,” reads the statement in part, adding that Farmajo will shoulder all the responsibility of the consequences of a disputed election.

This followed the FEIT announcement of the schedule for Senate election by the Federal Member States parliaments that it said will begin next week and completed between Dec 31, 2020, and Jan 6, 2021.

The commission failed to declare the dates for the 275-member Lower House chamber of the Federal parliament and presidential elections but said the selection of electoral delegates will start January 7.

The opposition warned the Federal Member States against participating in a disputed election process which could lead to instability in their regions as Farmajo ignores advice to fix stakeholders’ concerns.

The current election standoff caused the failure in a deadline to hold parliamentary elections on Dec. 1 of this year and the opposition maintained to demand reforms in the Federal and State level election bodies.

Somalia is currently at an electoral crossroads as the country's insecurity is still active, with Al-Shabaab and other militant groups continuing to destabilize many parts of the country and seeking to prevent democratic elections.